The city of Los Angeles may soon honor Pink’s Hot Dogs with a colorful tribute by designating the intersection of La Brea and Melrose avenues as Pink’s Square. 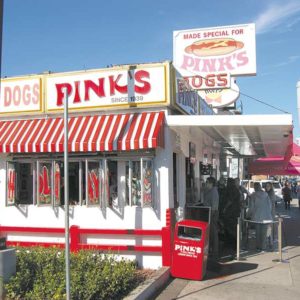 The intersection of La Brea and Melrose Avenue is being considered for designation as Pink’s Square in tribute to Pink’s Hot Dogs. (photo by Edwin Folven)

Councilman Paul Koretz, 5th District, introduced a motion on Feb. 7 calling for the designation at the intersection near the iconic hot dog stand. The council has not scheduled a date to consider the motion, which will first be heard in the public works committee, said Alison Simard, director of communications for Koretz.

Not included in the motion is a request for the crosswalks to be painted with pink stripes – an idea proposed by owners Richard, Gloria and Beverly Pink and the Mid City West Community Council. Simard said a request for pink crosswalks was not formally made to the city, but the councilman is open to considering it.

“I think recognizing the legacy in a creative way is very appropriate,” Koretz said. “If you are going to go pink, that’s where you want to do it.”

“We felt it was great synergy, a way to do two things at once,” Epstein said.

Richard Pink said he will work with Koretz further on the pink crosswalks idea, and is optimistic about the possible designation of Pink’s Square.

“Obviously, we’re thrilled, we’re excited, we’re proud,” Pink said. “It’s a recognition of a business that had the courage, strength and backbone to stay true to its roots of serving hots dogs.”

Koretz’s motion refers to the stand’s longevity since Paul and Betty Pink first started with a pushcart near the intersection. The Pinks eventually moved into a permanent stand nearby and later passed the torch to their children, Richard and Beverly, who along with Richard’s wife Gloria, currently run the stand. Customers frequently form long lines to order the numerous varieties of hot dogs, which also include a vegan dog that is Koretz’s favorite, Simard said.

“To date, the family has created over 35 combinations of hot dogs and a dozen variety of hamburgers to satisfy the varied taste of its patrons,” the motion reads.

Another bond could be on Beverly Hills’ ballot