I found my heart in San Francisco 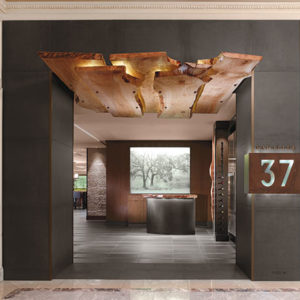 With Valentine’s Day just behind us, I thought we’d visit San Francisco where it’s easy to lose one’s heart to the City by the Bay, as it is most affectionately referred. It’s so easy to travel there – catch a flight at Burbank Airport, walk to the BART train and within an hour from landing, you’re in downtown. As I look out my window at the Metro construction, I dream about the year 2023 when we will be able to do the same.

We trekked up Nob Hill with suitcases in tow to the venerable Ritz Carlton and were greeted by Travis Wilson from the communications team who is very knowledgeable about the history and the amenities the hotel has to offer. The training Ritz Carlton employees receive is impeccable and evident in the level of professionalism and courtesy extended. 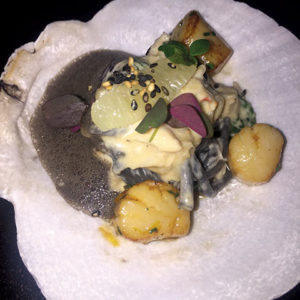 The squid ink bucatini pasta with Nantucket bay scallops and Dungeness crab at Parallel 37 was the most memorable dish of the weekend. (photo by Karen Villalpando)

The Ritz Carlton San Francisco was built in 1909 as the Metropolitan Life Insurance Company headquarters. It has been transformed into a classic modern Five Diamond hotel with grand marble columns, crystal chandeliers and recently renovated rooms and suites. It was just named the “Best San Francisco Hotel” by U.S. News and World Reports, 2018.

He trained with Charlie Trotter in Chicago and has created a progressive menu highlighting local San Francisco favorites. An amuse bouche of ocean trout roe was served in a large one-bite spoon and was the perfect way to tantalize our taste buds. We continued with five small courses for the evening. The first was a carrot, coconut and green papaya salad topped with King crab and a red pepper sabayon. It was light, refreshing and layered with flavors and textures. It was paired with a Duckhorn sauvignon blanc which matched the crisp, light flavors of the dish. The next course was my favorite of the evening and I would fly there now just to enjoy this again: a squid ink bucatini pasta with sweet Nantucket bay scallops and local Dungeness crab with sesame foam and Meyer lemon. The sweetness of the scallops combined well with the richness of the pasta, and the sesame foam provided a creamy element. The Meyer lemon gave it a zingy acid to balance out the dish. This was paired with the Greg Norman chardonnay and was simply amazing. 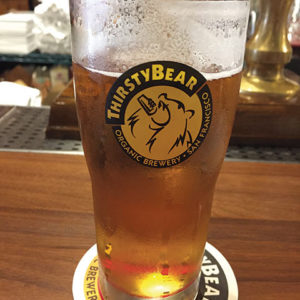 The service at Parallel 37 was top notch, as servers knew the appropriate time to approach the table and whisk away dishes or replenish wine and water. The meal continued with duck served three ways: a Chinese five-spice breast, the loin with leg confit and seared foie gras. A jammy yet earthy Croix pinot noir paired very well with the duck. The dish highlighted Rotondo’s culinary skills showing versatility and sophistication.

The grand finale was bison three ways: the ultra tender loin, a light bison sausage and a rich bison short rib fritter. The presentation was unique and again showed diverse skills, however, the bucatini stole the show for me. 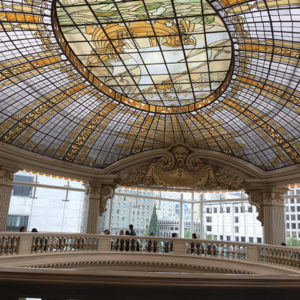 Pastry chef Andrea Correa dazzles with desserts like the dark chocolate crémeux with a coffee cake and the caramelia mousse with orange jam and hazelnut crumble.

I was thrilled with our dinner at Parallel 37 and will go back the next time we visit the city. But that was just the first night in this city of love and we had lots of exploring to do.

We began day two by walking to Chinatown. It had been years since we were there and we really enjoyed the community spirit. It was clean and tidy, with shops buzzing with commerce, tourists and even a funeral parade. Shop keepers know each other and you sense a genuine camaraderie among them. We purchased table linens from one, a silk jacket from another and silk scarves from a third. Chinese restaurants are on every corner so choices can seem a bit overwhelming. Begoni Grill was recommended to us as “the best hidden gem in Chinatown” so we sauntered in and enjoyed a delicious Chinese lunch. Crispy Peking duck, authentic dim sum, Shanghai dumplings, spicy beef with flaming chili oil (careful, it’s hot!) were just a few of the chef’s specialties. They have a full bar and beer on tap. It’s just a short walk from the hotel on Jackson street.

Speaking of beer, there is a fun hop-on, hop-off brewery tour put on by Brews on the Bay. The San Francisco Brewers Guild operate the bus tour and schedules and events can be found at drinksfbeer.com. We opted to visit a few of the breweries on our own and started at Thirsty Bear, an organic owned by brew master Ron Silberstein. He and head brewer Brenden Dobel make some great beer, including lagers, IPAs, pilsner, porter and more. The revolving list is seasonal so check back often for new varieties. The Howard Street IPA was my favorite, while Michael was jazzed about the Admiral Maltings Lager. As their website states: “We have beers for everyone; but not every beer is for anyone!”

Spanish tapas are some tasty bites, and the atmosphere is friendly and approachable. 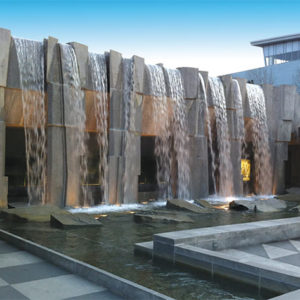 Another delicious San Francisco treat to enjoy with a cold beer is clam chowder in a bread bowl. Pier 39, the bustling tourist hub, offers plenty of restaurants serving the creamy soup. We opted for Pier Market Seafood with a table overlooking the bay and watching sea lions frolic in the water. It was a picture-perfect afternoon, with just a slight breeze and sun reflecting off the ocean. We started with steamed clams in garlic, butter and white wine and crusty Boudin sourdough bread. The bakery supplies the restaurant with this hometown favorite. Mesquite grilled seafood with daily fresh fish, crab cakes and whole Dungeness crab are the restaurant’s specialties. However, I came for the New England clam chowder in a bread bowl – voted best on the Pier. Yes, it was more bread but when you’re in sourdough country, indulge! And I certainly did.

Shopping is a great way to walk off a rich lunch and Union Square is the ultimate shopping district in the city. Anchors Bloomingdale’s, Macy’s, Neiman Marcus, Nordstrom and Saks Fifth Avenue provide the department store experience and hundreds of designers like Alexander McQueen, Hermes and Dior leave no fashion look unturned. 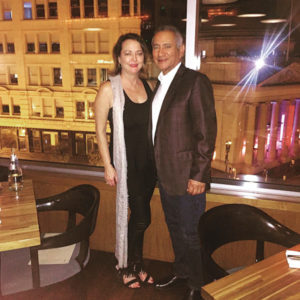 MKT Restaurant and Bar at the Four Seasons is casual, fun and has great views of the city. (photo courtesy of MKT staff)

The most breathtaking thing I saw however, wasn’t a designer gown, but the stained glass domed ceiling at Neiman Marcus. The Rotunda was salvaged from the City of Paris building that was demolished when Neiman Marcus announced in 1974 it had purchased the building, one of only a few that withstood the 1906 earthquake. While not everyone agrees with the marriage of the domed stained glass ceiling and the architecture of the modern Neiman Marcus store, one thing remains clear – the Rotunda remains a centerpiece of San Francisco heritage. The Rotunda also serves as Neiman’s lunch and tea room. The experience is high-brow with a lovely menu and complimentary course of chicken broth which warmed me on a chilly day.

We spent the next two evenings at the Four Seasons, a sleek modern hotel with views of the skyline.

The hotel is located at Market and Third Street, just steps from Union Square making it an ideal location. The five-star hotel accommodations include 277 rooms with premier and deluxe suites rising 17 stories above Market Street. Located just around the corner from SFMOMA, the Four Seasons boasts an extensive art collection themselves.

Just across the street is Yerba Buena Gardens, a green oasis in the heart of the city. The Martin Luther King Jr. Waterfall, designed by Dutch artist Lin Utzon, is flanked by silver walls that reflect the water in the sunlight. Other public art includes the “Green Glass Ship” an 18-foot high sculpture, and a bronze statue of the “Shaking Man.” Admission to the gardens is free and provides a quiet escape just steps from the bustling business corridor.

Back at the hotel, enjoy handcrafted cocktails and oysters on the half shell at MKT Restaurant and Bar. The seafood-centric menu features gulf prawns, mussels, Manila clams, scallops and roasted whole branzino, just to name a few of the main dishes. Open all day, the casual restaurant has a lively bar scene after dinner with locals and tourists alike enjoying the fun atmosphere. A hearty brunch is served on the weekends.

Next door to the hotel is the Press Club, which we were naturally drawn to. However, their reference to press is not a printing press but rather a wine press. With hundreds of bottles available, enjoy an afternoon of tasting and relaxing with small bites at this wine bar and lounge.

The city of San Francisco has so much to offer – art, dining, shopping, culture and history. Take your sweetheart and explore the city of love. You may just leave your heart in San Francisco.