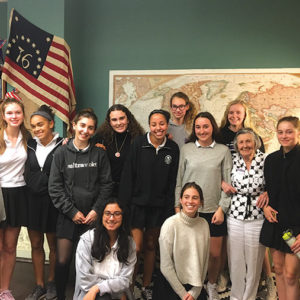 (photo courtesy of the Los Angeles Museum of the Holocaust)

Last week, Auschwitz-Birkenau survivor Mary Bauer spoke to an 11th grade honors modern world history class at Marlborough School as part of the class’ case study on Hitler and Nazi Germany. Inviting Bauer to speak to the class was the idea of one of the students, who was an intern at Los Angeles Museum of the Holocaust last summer. While working at the museum, the student was part of a group of interns who recorded an interview of Bauer, and she wanted her classmates at Marlborough to have the same unforgettable experience of interacting firsthand with a Holocaust survivor. The Los Angeles Museum of the Holocaust is located at 100 The Grove Drive. For information, visit lamoth.org.