The Hollywood Pantages Theatre has announced the 2018-19 season, which includes seven productions. 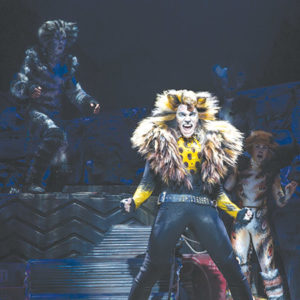 The feline fantasy world of “Cats” comes to life at the Hollywood Pantages Theatre from Feb. 26-March 24, 2019. (photo by Matthew Murphy)

The season launches with “A Bronx Tale” running from Nov. 6-15. Based on a one-man show that inspired the now classic film by the same name, the musical will take audiences to the stoops of the Bronx in the 1960s, where a young man is caught between the father he loves and the mob boss he would love to be.

“Hello, Dolly” makes its Los Angeles debut from Feb. 26-March 19, 2019. “Hello, Dolly!” features Broadway classics such as “Before the Parade Passes By,” “It Only Takes a Moment,” “Put on Your Sunday Clothes,” and the title song, “Hello, Dolly!”

The national tour of the Broadway revival of Andrew Lloyd Webber’s musical ”Cats” will run from Feb. 26-March 24, 2019. Based on T.S. Eliot’s “Old Possum’s Book of Practical Cats,” the original Broadway production opened in 1982 on Broadway. The revival will introduce a new generation to the timeless classic.

The theater will host a production of “Fiddler on the Roof” running from April 16-May 5, 2019. The Broadway classic is a heartwarming story featuring Broadway hits “To Life (L’Chaim!),” “If I Were A Rich Man,” “Sunrise, Sunset,” “Matchmaker, Matchmaker” and “Tradition.”

The Tony Award-winning musical “Les Miserables” returns from May 7-June 2, 2019. Set against the backdrop of 19th-century France, the production tells a story of broken dreams and unrequited love, passion, sacrifice and redemption.

The season concludes with “Miss Saigon,” from July 16-Aug. 11, 2019. It follows the story of a young Vietnamese woman orphaned by war and an encounter with an American G.I. that will change their lives forever.

“When we discovered the amazing shows we were going to be offering to our dedicated season ticket holders, and all theater lovers in Los Angeles, we felt like kids in a candy store, or in this case … a chocolate factory,” said Hollywood Pantages Theatre General Manager Jeff Loeb. “This season, our historic venue will play host to the most treasured stories of the last 50 plus years, brought to life by the world’s scrumdiddlyumptious composers and playwrights. Whether you join us for the laughs, the tears, the drama or the spectacle, we’ve got your golden ticket to a great season of Broadway musicals.”

Sculptor Nijel Binns to speak at The Ebell