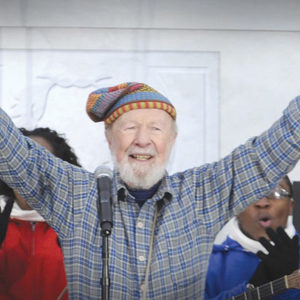 Pete Seeger will be honored in a new exhibition highlighting his legacy in both music and activism. (photo courtesy of the Pete Seeger Family)

The Woody Guthrie Center and the Grammy Museum present “How Can I Keep From Singing: The Work of Pete Seeger,” an exhibit featuring original documents and artifacts from Seeger’s life and work, which shows his influence as a musician, social activist, environmentalist, promoter of peace and community builder.

Having previously been displayed at the Woody Guthrie Center in Tulsa, Oklahoma, the exhibit will be on display at the Grammy Museum now through September 2018.

The limited display will include original artifacts and documents from Seeger, including lyrics, instruments, photos and videos, and letters sent to him from Johnny Cash and ethnomusicologist Alan Lomax. The exhibit will also include Seeger’s personal clothing, tools used in his cabin and awards received.

The Grammy Museum is located at 800 W. Olympic Blvd.