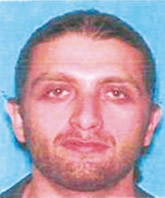 The defendant, Artyom Gasparyan, has been in custody at the Men’s Central Jail without bail since Jan. 4, 2016, when officers involved in a manhunt for the suspect located him at an auto repair shop in Sunland. Gasparyan jumped in a car and drove away. Police pursued Gasparyan until he crashed on the Golden State (5) Freeway near Sylmar. The suspect, who was armed with a handgun, got out of his vehicle and tried to run before being shot by officers. He was treated and has recovered.

Gasparyan’s alleged crime spree included a shooting in West Hollywood that occurred shortly before 1 a.m. on Dec. 29, 2015, in the 1000 block of Kings Road. The suspect allegedly shot an unidentified restaurant deliveryman. The victim later recovered. Investigators said the motive was robbery.

Gasparyan was also charged in a series of robberies, attempted murders, carjackings and other crimes in December 2015.

The crimes include the shooting of two men on Dec. 9, 2015, in Burbank, and the murder of a man on Dec. 30, 2015, in Panorama City. Gasparyan has also been charged with attempted murder and assault with a deadly weapon for an alleged crime that occurred in Van Nuys on Aug. 5, 2015.

On Jan. 1, 2016, an off-duty officer recognized a Volkswagen on the Century (105) Freeway in connection with the crime spree. The officer followed the Volkswagen and notified fellow officers who joined the pursuit.

When the Volkswagen stopped in South Los Angeles, a passenger who was allegedly Gasparyan’s accomplice, later identified as Daniel Ramirez, 25, jumped out of the car and carjacked another driver at gunpoint. Gasparyan, who is believed to have been driving the Volkswagen, fled the scene and eluded police until his arrest on Jan. 4, 2016.

Officers pursued the vehicle stolen at gunpoint by Ramirez to a residence in Long Beach, where the suspect forced his way into a home, shot two people and stabbed another before committing suicide.

Gasparyan is next scheduled to appear on Feb. 15 in Los Angeles Superior Court.