More than 16 months since a woman suffering from Alzheimer’s disease disappeared after visiting the Los Angeles County Museum of Art, law enforcement and her family are still searching for clues. 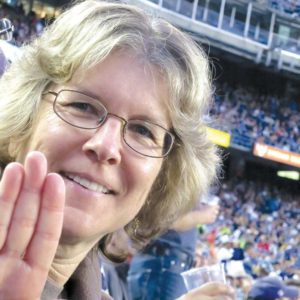 Police and family members hope someone will provide information that will locate Nancy Paulikas, who went missing in October 2016. (photo courtesy of Kirk Moody)

After learning about the plight of the missing woman, Nancy Paulikas, and others suffering from dementia, the Los Angeles County Board of Supervisors approved a motion last week to create a program aimed at locating people with Alzheimer’s disease, dementia and autism who are susceptible to wandering.

The board dedicated $765,000 for the program and will partner with Project Lifesaver, a nonprofit company that sells tracking bracelets and other products to help care for loved ones. The county will hire a staff of four administrators and purchase equipment that will enable law enforcement to track individuals with cognitive disorders.

Participation in the program is voluntary and the bracelets cost approximately $375. A similar program in Glendale has a 100 percent success rate.

“Over the course of the last year, I have talked to the husbands, wives, parents and adult children of individuals with autism and dementia who live in constant fear of what might happen if they turn their back for just one minute,” said Supervisor Janice Hahn, 4th District, who authored the motion on Project Lifesaver. “This program will not only save lives, it will provide peace of mind to caretakers countywide. They will know they are not alone.”

The county is funding the purchase of equipment to interface with the bracelets that will be placed in law enforcement helicopters and will be available to personnel at individual sheriff’s stations.

Paulikas’ husband Kirk Moody said having a tracking bracelet might have prevented his wife’s disappearance on Oct. 15, 2016.

“Unfortunately, people like Nancy with dementia, and people with autism are at great risk of becoming lost or wandering from their caregivers,” Moody said. “These vulnerable citizens, an increasing segment of our population, can be swallowed up by the sheer size of the city and overwhelming number of people.”

Law enforcement authorities do not suspect foul play in Paulikas’ disappearance. She and Moody were separated when they went into restrooms on different floors of the museum. Security camera footage showed Paulikas walking west on Wilshire Boulevard toward McCarthy Vista/Crescent Heights Boulevard shortly after being separated from family.

Moody said he is at a loss about what to do next in the search for his missing wife. He and a small army of family and friends have canvassed the neighborhoods around the museum posting flyers and have worked with local, state and federal agencies in an attempt to locate her. The Manhattan Beach Police Department is spearheading the investigation because Moody and Paulikas live there. The theory is Paulikas was taken in by someone and may be lost in the system at a care facility.

Moody and his supporters have sent letters and called thousands of hospitals, residential care facilities and similar locations. They have also been in frequent contact with the Los Angeles County Coroner’s Office and coroner’s offices in other jurisdictions.

After contacting all of the larger senior care facilities in Los Angeles and surrounding counties, he has been visiting smaller care facilities. He said it is often frustrating because he has mailed flyers to many of the facilities, but when he arrives, no one knows about his missing wife.

“The state has a database of licensed facilities and we are going off that,” Moody said. “They fall into two categories, ones with 50-plus people, and half that are smaller than that, many with only six people. I drew a map around LACMA and there are approximately 320 of them. I have been to most already, but have about 20 more. The problem is the information is out there, it just isn’t getting to the people who need it.”

LACMA administrators have been supportive, and hosted an event last fall at which Moody was a special guest. The event included films about people suffering with Alzheimer’s disease.

Moody said he is optimistic his wife will be found. He is in frequent contact with personnel at the California Department of Justice, which receives reports from coroner’s offices throughout the state about unidentified bodies in morgues and none have matched Paulikas, he said.

Paulikas, 57, is white, 5 feet 7 inches tall and 140 pounds with light brown and gray hair. She was last seen wearing a red print shirt, blue jeans and blue sneakers. A $30,000 reward has been offered.

Moody added that he hopes people will continue to share information about Paulikas using social media. He encouraged people to visit facebook.com/nancyismissing and nancyismissing.blogspot.com.