Beverly Hills voters will decide in a few months whether to issue $385 million in general obligation bonds to the school district for construction.

The Beverly Hills Unified School District’s Board of Education voted 5-0 on Feb. 27 to put the measure on the ballot in June’s statewide primary election. The unanimous board approval means 55 percent of voters need to support the measure for it to pass. 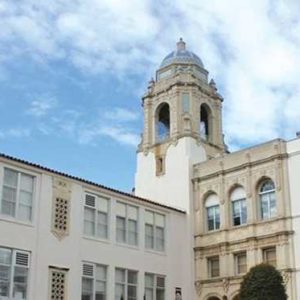 El Rodeo School would be one of the primary beneficiaries of the new ballot measure. (photo courtesy of the Beverly Hills Unified School District)

Beverly Hills High School and El Rodeo School would undergo the most work, with some improvements to the other three schools. The new construction would include bolstering earthquake and fire safety, and repairing or replacing roofs and electrical systems. Expenditures would be evaluated by an independent audit.

The funding would add to Measure E, approved by Beverly Hills voters in 2008 to issue $334 million in general obligation bonds. It would levy 4.4 cents per $100 of assessed value, $23.7 million annually, according to the bond language.

In November 2016, a $260 million bond measure fell a few percentage points short of passage. Measure Y, supported by approximately 64 percent of Beverly Hills voters, needed to reach a two-thirds majority because it was not approved by a supermajority of school board members. Board members Howard Goldstein, Noah Margo and Lisa Korbatov supported Measure Y. Mel Spitz and Isabel Hacker voted against it.

Opponents of Measure Y, including Councilman John Mirisch, accused the board of breaking a Measure E promise to avoid increasing property taxes. Mirisch, who was mayor during the November 2016 election, called it a “breach of trust.” But during a meeting last month, when the board was considering options to reconfigure its four K-8 schools, he spoke in favor of a construction bond measure.

No decisions on reconfiguration are imminent. After a recommendation from Superintendent Michael Bregy to consolidate to three K-8 schools for next school year, followed by a transition to three K-5 schools and one 6-8 middle school, the board decided to keep the current configuration in 2018-19 and evaluate a broader range of options.

Mirisch qualified his support for a bond measure this week, telling the school board that the lingering questions over how to configure the district raise questions about the work to be done. He mentioned additional funding needed for improvements to Hawthorne School, which would only receive a renovated auditorium if the proposed bond passes.

“This to me, unfortunately, seems not very well thought out and it seems to be yet another time to try and treat our residents like ATMs,” Mirisch said.

With June “right around the corner,” Mayor Lili Bosse noted the relatively short time frame the district has to notify voters. In the coming months, the district will promote the ballot measure on its website, possibly make a presentation at City Hall during a council meeting and make presentations at PTA meetings.

“I would like to ask that when you do go to the PTAs,” Mirisch said, “you please allow people to present not just a timeshare sales pitch version of it, but you allow people who have differing opinions to be able to present them as well as to why maybe this is the wrong move for the district, for the city, especially not knowing what the reconfiguration is.”

School board President Lisa Korbatov said the new construction would not “in any way inhibit the reconfiguration discussion.” The superintendent’s recommendation, and other options that had been suggested, such as a K-6 and 7-12 model, will remain feasible.

“I can understand how, having heard this for the first time, it’s a shocker and I can understand the concerns,” Spitz said, addressing the council members. “But I hope that you realize that we’ve been working on this for quite a long time, and we have even had open public meetings, study sessions – where nobody attended – but it’s something that we’ve been working on, and I can just personally assure you that every project in there is needed, and needed urgently. And I’m very careful about supporting these kinds of issues. I can tell you this: It’s not a blank check and I favor it.”