‘Black Panther’ deserves all the hype and praise coming its way

Earning more than $200 million opening weekend domestically, “Black Panther” doesn’t need help filling seats. It’s a hit, and no amount of white nationalist bemoaning or fabricated stories about black-on-white assaults at screenings will slow its immediate ascent to the top of most superhero movie best-of lists. A fitting result for a story that began in 1966. 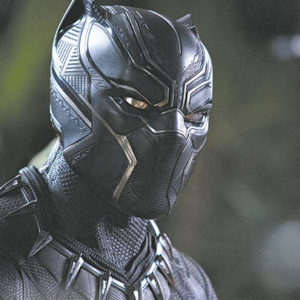 Chadwick Boseman is the Black Panther – King T’Challa of Wakanda – in the new hit film. (photo courtesy of Marvel Studios)

While other caped crusaders took on flamboyant nemeses (I’m looking at you Leap Frog and Lady Stilt-Man), Black Panther fought the KKK and other more realistic embodiments of evil. What makes King T’Challa, the ruler of fictional utopian African kingdom Wakanda, so culturally significant is how powerful he is physically, intellectually and politically, something the film taps into quite well with help from Chadwick Boseman’s remarkable performance in the lead role, top-tier writing and an insane budget of $200 million and professional team to match.

“Black Panther,” as an important cultural experience, is best summed up by a recent YouTube video of two black men at a theater, ecstatic about a promo poster for the film. “This is what white people get to feel all the time,” one of them said, noting how the predominantly black cast of “Black Panther” differs from the token-black casting of most blockbuster films with white leads.

In response to limp accusations of political correctness, it’s easy to defend “Black Panther” by saying it’s an incredible film regardless of addressing what it means for black audiences, how it broaches identity politics. Easily, I could praise the visual effects, acting and writing in ambiguous terms, resisting any racial coding at all, even claiming it’s more than a social-issue film. But such statements merely promote a naive colorblindness that seeks to make audiences trying to avoid “politics” – as if any film is free of political meaning – more accepting with a neutered film.

So let’s be clear: “Black Panther” is amazing because of how seriously it takes race, how much it emphasizes black bodies, rather than passively displaying them as decorative background objects. Certainly, action sequences, sublime visuals and some humor soften the blow, but this story is not meant to make white audiences – “colonizers,” as T’Challa’s sister Shuri (amazingly performed by Letitia Wright) calls one white character – more comfortable. 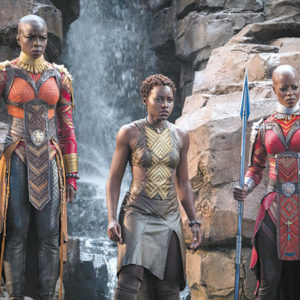 While Black Panther began his literary existence as the product of white creators Stan Lee and Jack Kirby, the most popular print runs belong to black writers Christopher Priest and Reginald Hudlin, who directed 2017’s “Marshall,” starring Boseman. Even in the 1970s, black artist Billy Graham, who contributed “Luke Cage, Hero for Hire,” contributed to the character when he took the lead in the “Jungle Action” series.

Marvel Studios took this long history of black authors to heart when it sought a black director and writers for the film, ultimately settling on Ryan Coogler (“Fruitvale Station,” “Creed”), who surrounds himself with a unique team, including co-screenwriter Joe Robert Cole (“American Crime Story”), costume designer Ruth E. Clark, production design Hannah Beachler and cinematographer Rachel Morrison (“Mudbound,” “Dope”), the first woman nominated for an Oscar in her field.

This is an enormous undertaking, even more than several other Marvel projects, because of the source material. For the uninitiated, one of the most compelling aspects of Black Panther’s story is the fictional African nation of Wakanda, an uncolonized kingdom rooted both in African heritage and technologically advanced society thanks to a unique metal mined in the area called Vibranium (the indestructible and very fictional metal of Captain America’s shield). Wakanda is an Afrofuturist superpower in hiding.

The film understands how complex this concept is in the face of the continent’s violent relationship with the West. Hudlin’s comics stories often focused on the power fantasy of an uncolonized African nation, nothing about how Wakanda hid its true might from the rest of the world for centuries, remaining in physical and cultural isolation. That plot point, used in the film, screams power, but it hardly seems like the ideological view of a hero.

Should Wakanda preserve its culture and resources at the sake of its neighbors? As the new ruler of Wakanda – following his father T’Chaka’s (John Kani) tragic end in “Captain America: Civil War” – T’Challa must decide what he feels is right for his people, often with the help of several powerful female characters: T’Challa’s ex and a spy Nakia (Lupita Nyong’o), sister and lead scientist Shuri (Wright) and Okoye (Danai Gurira), general of Wakanda’s all-women special forces, the Dora Milaje.

Going a step further than many of the comics arcs, social responsibility remains an important topic. If a nation found a way to avoid European dominance, why didn’t it do more to help surrounding peoples? That’s the central question that motivates villain Eric Stevens (Michael B. Jordan) – Killmonger to those he kills – as he seeks to take down Wakanda’s royal lineage. His motivations are just, but his means are both vile and a touch predictable in their overt villainy.

I watch “Black Panther” as a voyeur witnessing intimate details of a story, a people, whose experiences are foreign to me. Film allows for a level of controlled empathy, but not complete relation. I could certainly take a defensive position, call this yet another superhero film and reassert a central role as spectator, but I’d rather just experience it again, learning more with each subsequent viewing. Wakanda forever.

Oscars at The Hollywood Roosevelt