Bike lanes will soon appear on Santa Monica Boulevard in Beverly Hills as construction along the street continues.

During a study session on Feb. 6, City Council members listened to a staff presentation detailing plans to stripe the road with bike lanes. Once completed, the stretch of North Santa Monica Boulevard between Wilshire Boulevard and Doheny Drive will have two eastbound lanes, two westbound lanes, a center turn lane and bike lanes on each side. 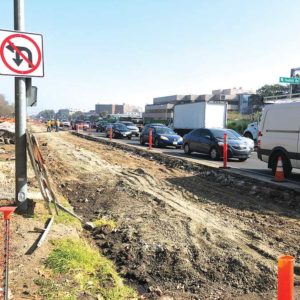 Construction on Santa Monica Boulevard will include bike lanes. (photo by Luke Harold)

The plan showed that the bike lanes would be separated from traffic lanes with a white line, with green markings at intersections for added safety, for an estimated cost of $35,000.

But Mayor Lili Bosse, along with council members Robert Wunderlich and John Mirisch, directed staff to paint the lanes green, which will triple the cost, according to staff, adding approximately $70,000 to the project. It will also require more maintenance.

“It makes no sense to me not to make the entire lane green,” Bosse said.

The degree to which bike lanes improve safety has been in dispute. Bike lanes are favored by cyclists but sometimes criticized by motorists who say they’re easy to overlook, and that they give cyclists a false sense of security.

A 2017 peer-reviewed study from the American Journal of Public Health said that the U.S. has made the least progress compared to several other countries over the last three decades in reducing per-capita fatality rates for walkers and bikers. The study suggested that bike lanes have led to greater reductions in per capita fatalities in other countries when they’re combined with other safety measures that are less common in the U.S., such as auto-free zones, neighborhoods with speed limits reduced to 20 miles per hour and priority traffic signals for cyclists.

Wunderlich said that painted lanes would help bicyclists feel safer, and Mirisch added that they would be more attractive.

The staff report said the city plans to use thermoplastic material, applied with reflective and anti-skid material, to mark the lanes and crosswalks, adding that it has the “highest durability of all options available.” Mirisch also suggested that the city look into using paint that retains sunlight and glows in the dark.

“This is just the beginning,” she said.

The Santa Monica Boulevard Reconstruction Project is scheduled for completion this spring.

If only the highway known as Olympic Boulevard had a safe biking option as well.

The city should make sure it coordinates with LA DOT to pick a movie friendly shade:
https://la.streetsblog.org/2017/06/13/ladot-and-film-industry-agree-to-compromise-on-green-bike-lanes/

I take objection to this quote:
“Bike lanes are favored by cyclists but sometimes criticized by motorists who say they’re easy to overlook.”
Whoever said this should not be driving.

Yay! Also: finally. Been waiting a decade for this!