Another bond could be on Beverly Hills’ ballot

The school board in Beverly Hills will hold a study session next week to consider a bond measure for continuing district-wide construction.

Board members could decide to put the measure on June’s ballot. Pending the outcome, they also discussed a parcel tax for November’s ballot. The funds from the latter, if approved, would help the district afford its current K-8 model as school board members, parents, students and other stakeholders consider long-term school configuration options. 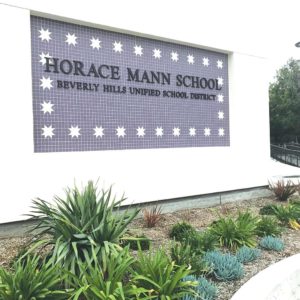 In a series of meetings over the past few weeks, Superintendent Michael Bregy recommended a reconfiguration to three K-8 schools in the 2018-19 school year, followed by a permanent transition to one 6-8 school and three K-5 schools in a subsequent year.

With backlash from many parents who attended the meetings, and despite support from a number of students and teachers, immediate plans for reconfiguration stalled last week. Board members decided to maintain the current configuration for next school year and further deliberate reconfiguration options, including how they would fit into ongoing construction throughout the district.

The district has been exploring reconfiguration for cost-savings, improving programming and in response to factors such as declining enrollment.

“The cure is worse than the disease,” Board of Education President Lisa Korbatov, a proponent of the K-8 model, said of reconfiguration. “You give away the entire K-8 model and go to a dedicated middle school, you do not know what you’ll get. You do not know how families will take to it, how the social-emotional will be for sixth, seventh and eighth graders.”

Korbatov said the cuts to programming over the years and construction at multiple schools have contributed to declining enrollment, a trend district officials expect to continue.

“Buildings started to age and they’re not well cared for, and people go, ‘This doesn’t look or feel like Beverly Hills,” she said. “We have to be honest. That’s why people left. A large number of people left because the buildings were aged, not in great shape.”

According to the district, a new bond valued at $60 per $100,000 of assessed valuation for the district’s taxable properties would yield proceeds of $414 million to $508.8 million, depending on the issuance schedule. The precise value of the bond the district would pursue is to be determined.

The Beverly Hills Unified School District’s 2017-18 tax rate is $80.08 per $100,000 of assessed valuation, and its bond tax rate was about 7 percent of total property taxes assessed against homeowners.

In 2008, Beverly Hills voters approved Measure E, allowing the district $334 million in general obligation bonds for construction. The funding led to the renovation of Horace Mann School and incremental progress of construction at other school sites. Another bond measure that would have funded additional construction, Measure Y, fell just short of the two-thirds support it needed to pass in November 2016.

School board member Mel Spitz, an opponent of Measure Y, gave his conditional support for pursuing a bond measure this year.

“I think it’s extremely important that in this measure that we will put on the ballot, that the projects are laid out, identified,” Spitz said. “I don’t think that this bond measure can look like Measure E, which was a blank check.”

Board members also discussed whether to ask Beverly Hills voters to approve a parcel tax that would help the district afford its current four K-8 schools in the interim as the district formulates a long-term configuration plan.

The district had 10,102 taxable parcels as of 2016-17, according to a presentation to the board. A $50 parcel tax would net a little more than $400,000 in revenue in the first year, and a $400 tax would net $3.2 million in the first year. The board could also consider a range of options in between. The tax would require two-thirds support from Beverly Hills voters. Senior citizens could be exempt.

“The parcel tax, I think, is an excellent way to let the community speak to us and say, ‘In the meantime, until you have your reconfiguration plan a little more solid, or however it fleshes itself out, we would like to maintain our four campuses,’” Margo added later in the meeting.

This year and last, the district has contended with a projected $5 million in cuts as it developed the budget for the next school year.

The board’s study session to discuss parameters of a bond measure is scheduled for Feb. 22.