The AIDS Healthcare Foundation plans to start moving low-income and homeless individuals into a former Sunset Boulevard motel next week.

The project at the former 27-room Sunset 8 motel in the 6500 block of Sunset Boulevard is part of a larger plan to alleviate homelessness. The organization has also purchased and is completing renovations at the 225-room Madison Hotel near Skid Row to offer more affordable housing. AHF President Michael Weinstein said the projects demonstrate how a private organization can move more quickly than local government in addressing the homeless crisis. He hopes they serve as models. 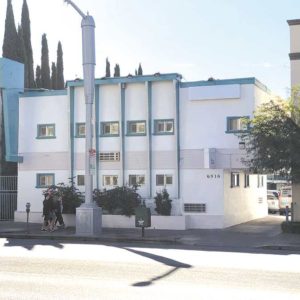 AIDS Healthcare Foundation is taking a new approach to creating affordable housing by transforming the former Super 8 motel on Sunset Boulevard into a facility that will house low-income and homeless individuals. (photo by Luke Harold)

“While the city talks about getting things online immediately, we are doing something,” Weinstein said. “With the case of the Sunset 8, it’s geared toward families. With the case of the Madison, when we took possession there were 80 people living there, and they will remain. We are also working with homeless organizations in downtown [to identify other tenants].”

The individuals being selected to live in the Sunset 8 motel receive services from AHF or were identified through referrals by organizations addressing homelessness. AHF is a leading provider of care to people with HIV and AIDS around the world. The Sunset 8 is next to another building AHF owns, and the organization had long been considering it as a place to house low-income or homeless clients.

“We had been eyeing that for a while and wanted to do a demonstration project,” said Ged Kenslea, senior director of communications for AHF. “We were seeing the crisis. People who have unreliable housing have difficulty in adhering to their treatment and taking medicine. That is something we are prioritizing, giving priority to individuals and families with illnesses and health conditions.”

Last year, AHF purchased the Sunset 8 – a roadside motel built in the 1940s that had become run down in recent years – for $4.6 million. The rooms were refurbished and are ready for occupancy, Kenslea said. AHF purchased the Madison Hotel downtown for just under $8 million.

Occupants will be people already receiving government assistance with housing such as Section 8, which provides vouchers for monthly rent. AHF will serve as the landlord and will keep rents at approximately $400 per month. The organization will also link residents to services from social service agencies and job counseling. The idea is to have people stay at the properties until they can afford to move into more permanent housing.

AHF’s plan is unfolding at the same time the Los Angeles City Council is considering a motion to create an ordinance that would make it easier for motels and hotels to be converted into affordable housing. The motion being considered was drafted by the Los Angeles Department of City Planning and is supported by local civic leaders. The council is also considering another motion drafted by the Planning Department to streamline the process for building new housing for homeless individuals so that projects can be approved within one year.

“These are common sense and cost-effective solutions aimed at addressing homelessness in our city,” Vince Bertoni, director of city planning, said in a statement. “By streamlining the approval process to bring more affordable housing online, and utilizing motels and hotels for supportive and transitional housing, we are addressing the immediate need for housing and helping our neediest community members.”

“The council member is supportive of creating more housing that is safe and legal, and he is keeping an eye on the proposed legislation as it moves through the process,” Arranaga said.

Los Angeles City Attorney Mike Feuer has also cited the conversion of motels as a viable approach to addressing the homelessness crisis.

“We can’t move fast enough to get homeless people sheltered,” Feuer said. “Motels throughout Los Angeles are an often underutilized source of housing, and they’re available now. No need to buy land, no time-consuming administrative hurdles to overcome, no lengthy, expensive construction.”

Kerry Morrison, executive director of the Hollywood Property Owners Alliance and founder of Hollywood 4WRD, an organization addressing the homeless crisis in the local area, said AHF’s plan is an innovative idea. Morrison, who also serves on the Measure HHH Citizens Oversight Committee, said the location is near organizations such as Blessed Sacrament Church that already provide services for homeless individuals.

“We need to turn over every stone to find permanent housing for everyone living on the streets right now,” Morrison said. “The city and the county is trying to build out this system right now so it targets the most vulnerable homeless population. We are coordinating it in a way so it matches the people to housing that is most appropriate for them. But there’s all these rules and procedures we have to go through at City Hall and these laws that have to be followed. If private people are able to transform housing, there is nothing preventing them from doing it.”

Morrison added that the idea for privately subsidized housing for homeless individuals is not unprecedented. She said in 2010, philanthropist Aileen Getty, heir to the Getty oil fortune, worked with Hollywood 4WRD to house approximately 280 chronically homeless individuals at the former Gilbert Hotel on Wilcox Avenue.

“Aileen paid to lodge people until we could find places where people could receive help. She was able to house these folks, and there were a lot of success stories,” Morrison said. “She did it for about two years and I think it cost about $180 a week. It took people who were homeless for 10 years and got them off the streets. It was all kind of off the radar. In one way, shape or form, housing that serves that group and gets people off the streets is very important.”