Putting a ring in the Academy Museum

Construction on the Academy Museum of Motion Pictures hits another milestone this month, with the installation of the ring beam steel, completing the superstructure of the sphere. 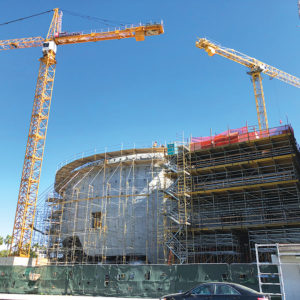 The musuem, located at the corner of Wilshire Boulevard and Fairfax Avenue, will reach new construction milestones in the months ahead. (photo by Luke Harold)

In April, construction will continue with the installation of the interior finishes in the Saban building including drywall, light fixtures, interior walls and bathroom fixtures.

In May, installation of the curtain wall glazing system for the north façade will take place.

Remediation of the Saban building’s exterior will continue through the first few months of this year, and work for the Dolby Terrace deck will begin this summer.

“The Academy Museum has already made great strides in raising funds, constructing the site, and developing the exhibition plans that will make this museum an essential destination for visitors and locals who love film,” said Ron Meyer, chair of the board, in a statement. “Now, with the formation of this board of trustees, we have real momentum. I couldn’t be more pleased by the talent we’ve gathered to oversee this great new institution.”

Meyer, vice chairman of NBCUniversal, led the inaugural meeting of the 12-member board of trustees on Dec. 4. Among the board’s responsibilities will be overseeing the museum’s strategic vision and maintaining its finances.

“The leaders who have joined together as the Academy Museum’s trustees are among the most respected and influential figures in the world of motion pictures and philanthropy,” said Kerry Brougher, director of the Academy Museum. “Their caliber speaks volumes about the level of achievement this museum aspires to attain. All of us who have been working to build this institution are immensely grateful to them for stepping forward to assume board responsibility as we move toward our grand opening in 2019.”