The Los Angeles LGBT Center has been awarded a $35,000 grant from the National Endowment for the Arts benefiting three of the center’s art education projects tailored to youth.

The projects are OutSet: The Young Filmmakers Project; We Can Be Heroes mural project; and Somos Iguales (We Are Equals) mural project offered in partnership with Latino Equality Alliance. 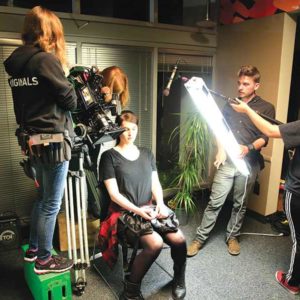 OutSet is one of the projects that will receive support from the grant. (photo courtesy of the Los Angeles LGBT Center)

The three projects are grouped under the NEA’s Art Works category, which is the foundation’s largest funding category and supports projects that focus on the creation of art that meets the highest standards of excellence, public engagement with diverse and excellent art, lifelong learning in the arts, and the strengthening of communities through the arts.

“Our life-enriching arts programs are integral to the health and well-being of our youth members, who deserve the opportunity to achieve their full – and creative – potential,” said Los Angeles LGBT Center CEO Lorri L. Jean. “Some of the world’s most dynamic and unforgettable works of expression have been created by LGBT people, and thanks to this prestigious grant from the National Endowment for the Arts, we can continue to inspire and invigorate the next generation of imaginative minds.”

We Can Be Heroes mural project engages transgender youth who are experiencing homelessness to create mural panels over eight weeks in an open studio at the center’s cultural arts venue. Under the guidance of a visual artist, the themes of the mural project focus on historical trans figures who have made significant contributions to the movement.

Offered in partnership with LEA, the Somos Iguales (We Are Equals) project convenes local LGBTQ youth and their allies ages 15-24 to participate in art classes held at Mi Centro, the center’s partnership location with LEA in Boyle Heights. Participants produce several mural panels depicting LGBT themes of importance to them and will be displayed temporarily at several high schools within the Los Angeles Unified School District.

“The community of Boyle Heights has a deep cultural history of empowerment for the Latino community, including the student walk-outs 50 years ago, the Chicano Moratorium, and politically charged murals – many of which were whitewashed to deny our community’s visibility,” said LEA Advisory Board President Ari Gutiérrez Arámbula. “This grant enables a further celebration of that cultural heritage, allowing us to reflect the many intersections of our LGBTQ and Latino communities.”

The $35,000 grant is part of the NEA’s first major announcement for fiscal year 2018 in which NEA Chairman Jane Chu approved more than $25 million in grants.

“It is energizing to see the impact that the arts are making throughout the United States. These NEA-supported projects, such as this one to the Los Angeles LGBT Center, are good examples of how the arts build stronger and more vibrant communities, improve well-being, prepare our children to succeed, and increase the quality of our lives,” said NEA Chairman Jane Chu. “At the National Endowment for the Arts, we believe that all people should have access to the joy, opportunities and connection the arts bring.”