The West Hollywood City Council hosted a study session on the county’s growing homelessness epidemic during its Feb. 5 meeting, continuing the city’s discussion of how best to coordinate law enforcement and social service resources. 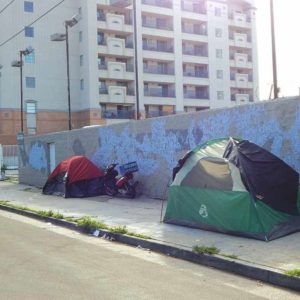 Leaders throughout the county are coordinating efforts to alleviate homelessness after voters during the last two elections approved funding to help solve the issue. (Park Labrea News/Beverly Press file photo)

“We’re starting to look at how to ensure our investments are having the biggest impact,” said Molly Rysman, housing and homelessness deputy for L.A. County Supervisor Sheila Kuehl, 3rd District.

Other participants at the study session were from the Los Angeles LGBT Center, Los Angeles Homeless Services Authority and sheriff’s department.

There are nearly 58,000 homeless people in Los Angeles County on any given night, according to the 2017 Greater Los Angeles Homeless Count results. There were 105 in West Hollywood, including 92 living on the street.

Despite the relatively low homeless population compared to neighboring communities in the city of Los Angeles, a few notable crimes involving homeless individuals over the past year have given residents cause for concern. In September, for example, 41-year-old transient Kisu Bradey Brown struck a man multiple times with a double-edged hatchet at a West Hollywood 7-Eleven.

“This, we can all agree, is a complex issue that no doubt requires complex solutions,” said Capt. Sergio Aloma, of the West Hollywood Sheriff’s Station. “ … Many of the solutions I think we’re all looking for go beyond the scope of traditional law enforcement strategies and policing.”

He emphasized the station’s dedication to law enforcement, but said many homeless individuals who don’t violate the law require other types of intervention.

“I certainly do not think that arresting the homeless is a solution, and I don’t think we can arrest ourselves out of this issue,” Aloma said.

But arrests have increased, he added. In 2017, 320 homeless individuals were arrested for felonies, misdemeanors and violations of local ordinances – 17 more than the totals from 2015 and 2016 combined.

“We have to find that healthy balance between the rights of the homeless people and the quality of life of people who live, work and visit the city of West Hollywood,” said Lt. Ed Ramirez, of the West Hollywood Sheriff’s Station.

One of the countywide investments to alleviate the homeless crisis is Measure H, approved by nearly 70 percent of voters in March 2017 to add a 0.25 percent sales tax for 10 years to homeless services and prevention. It is expected to generate approximately $355 million annually.

More than 8,000 volunteers participated in this year’s homeless count, which will help guide future efforts among local officials. Results are being tallied.

She said the agency is “taking a regional approach” to bolster outreach around the county, and working on initiatives such as a portal to better field requests for outreach and dispatch workers.

“The work of outreach workers is absolutely, probably one of the most, arguably the most challenging functions of this work,” Murphy said. “Making sure outreach workers, no matter the agency, or entity or T-shirt worn that they all have access to really good training and networking.”

“We have been very pleased with the county of Los Angeles and its decriminalization platform as part of the homelessness initiative,” she said. “I’m very happy to hear for the city of West Hollywood and the sheriff’s department that law enforcement is seen as a partner with social services rather than a replacement for social services, and that everyone around this table, it seems, is acknowledging that law enforcement cannot be the solution to homelessness.”

West Hollywood also debuted a “Real Change” donation program last month. Residents and visitors can drop coins in one of four purple meters throughout the city to support its efforts to combat homelessness.

“There are four donation stations presently, and, if the program is successful, perhaps we can add more throughout the city,” Councilwoman Lauren Meister said in a statement. “Folks can feel good about feeding these meters because the funds collected will go towards the city’s Homeless Initiative. It’s a great way for community members to support the city’s outreach efforts and services to assist people who are experiencing homelessness.”