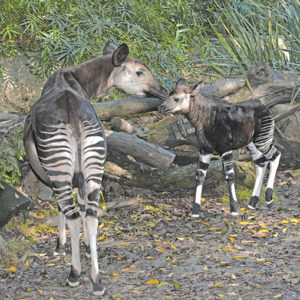 A new okapi calf, also known as a forest giraffe, was born on Nov. 10. The new calf has yet to be named but is now on view at the Los Angeles Zoo. (photo by Tad Motoyama)

The calf was born on Nov. 10 and is the second offspring for 14-year-old mother Opey, and the first for 3-year-old father Jackson. The couple was paired as part of an Association of Zoos and Aquariums Species Survival Plan program with the goal of increasing the okapi population, which is rapidly declining in the wild. The currently unnamed calf spent the first couple of months behind the scenes bonding with mother and familiarizing herself with her new home and the animal care staff.

“I am thrilled to welcome this new Angeleno into the world, and congratulate the staff at the Los Angeles Zoo and her mom, Opey, on the birth of this Okapi calf,” said Councilman David Ryu, 4th District. “This rare and beautiful animal is a testament to the Los Angeles Zoo’s incredible work caring for and fostering endangered animals.”

The Los Angeles Zoo contributes funds to The Okapi Conservation Project, a group founded in 1987 to generate support for the conservation of wild okapi. The okapi is an important species in rainforest habitat that is rapidly disappearing due to expansion of human settlement, deforestation and forest degradation. Over the last decade, the wild okapi population has decreased, with 10,000 to 50,000 currently living in the wild. There are currently close to 100 okapi in U.S. zoos.

“There was a time not so long ago when having okapis in a zoo was extraordinarily rare,” said Josh Sisk, curator of mammals for the Los Angeles Zoo. “But, due to species survival plan programs being so proactive and being able to breed these animals in zoos, the captive population is doing extremely well. This is just one example of how important zoos are for helping sustain such an endangered species. By guests being able to see an okapi in a zoo, it starts a conversation about how we can save this species and their habitat in the wild.”

Native to central Africa, okapi were discovered by Europeans in 1901. Because of their naturally shy nature, the reclusive species is rarely seen in the wild.

While some guests may confuse the shy, solitary animals with zebras due to the black and white striped patterns on their front and hind legs, okapi are actually the closest living relative to giraffes. Adult okapis are over 6 feet tall and have prehensile tongues that are 14-18 inches long.

Visitors can view the female calf and her mother daily. The calf brings the zoo’s okapi population to four, including its mother, father and a 4-year-old male born in August 2013 named Berani.

Rock a bye baby on a comfy new mat