The West Hollywood bike share program, WeHo Pedals, is looking for a corporate sponsor to help bolster the success of the program. It is currently operating at a projected deficit without a system-wide sponsor, according to a city staff report. 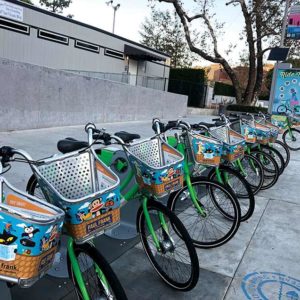 Riders have traveled tens of thousands of miles using WeHo Pedals while the program is operating at a projected deficit. (photo by Crystal Duan)

The combination of its rider fees and station-based advertising has not made the program fully financially independent yet, said West Hollywood communications officer Joshua Schare.

The revenue that WeHo Pedals received over the last 12 months covers 33 percent of the system’s operational costs of $344,750 a year, excluding costs to the city, according to a city staff report.

WeHo Pedals has a pay-as-you-go option with $7 an hour, a $25 monthly plan and a $99 yearly plan. It also has options of a discounted plan for students and an income-based plan for low-income households.

The program has had seasonal sponsors such as Google and Paul Frank in November and December. CycleHop and the city are currently working on producing a list of prospective sponsors and are meeting on a bi-weekly basis to review progress. Short-term sponsorships generated $31,000 in revenue to support the bike share program. CycleHop is also projecting that there will be several additional short-term sponsors in 2018, Siegl said.

The West Hollywood City Council on Jan. 16 approved a plan to merge the program with its counterparts in other parts of Los Angeles in an initiative called Bike Share Connect. The Santa Monica, UCLA and Beverly Hills bike share programs will integrate with West Hollywood’s WeHo Pedals in the upcoming months, Siegl said. Riders who are members of CycleHop bike share will be able to hop on bikes in the other cities and return them in those areas. The system will include more than 139 stations with a total of 830 bikes.

The merge is independent from financial considerations and was always a planned part of the bike share program, Schare said.

The city of Santa Monica’s system, Breeze, launched in 2015 and currently has 500 bikes. It previously experienced a similar issue to WeHo Pedals in running at a deficit. Breeze cost approximately $1.3 million to start and now has 79,000 subscribers, but only generated its needed revenue after partnering with Hulu.

Bruin Bike Share currently has 130 bikes at 18 hubs in the UCLA area. Beverly Hills Bike Share has 50 smart bikes. Both bike shares started in 2017 and do not have permanent sponsors yet, a budgeting aspect which is usually examined after the first year of operation.

The merger with the other bike shares should happen no later than March. Meanwhile, ridership in West Hollywood has still been growing at a steady rate, Siegl said.

“We’ve continued to see new members join the system, and see peaks during the summer months,” she said. “There’s less during this time of year, but we expect to see rates continue to grow.”

In the meantime, the system continues to look for a sponsor as clients will be developing their marketing budgets for fiscal years 2018 and 2019, and Siegl believes they will find one.