Trees on Eighth Street getting the ax

The city of Los Angeles is preparing to remove approximately 12 full-grown ficus trees on Eighth Street between Spaulding and Stanley avenues as part of the Safe Sidewalks LA program. 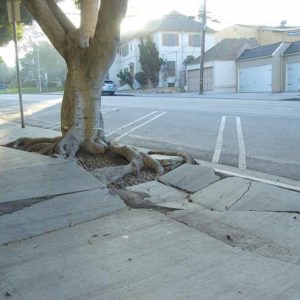 The city is planning to remove ficus trees on Eighth Street to accommodate sidewalk repairs needed to comply with Americans With Disabilities Act requirements. (photo by Edwin Folven)

The exact date for the removal is undetermined, but the project is imminent, as permits have already been issued, said Julie Stromberg, a member of the city’s Urban Forest Advisory Committee and the Safe Sidewalks LA Advisory Group. It will be the largest tree removal to date under the program to repair damaged sidewalks, added Stromberg, a Windsor Village resident and member of the Greater Wilshire Neighborhood Council.

“The problem is they are so massive that they are going to be taken out,” she said. “There have been new developments, though. I have been talking with urban forestry, and they said we should be able to save two or three.”

The city contends the large ficus trees must be removed because their roots have damaged adjacent sidewalks along the north side of Eighth Street. The tree removal is part of an initial phase of the Safe Sidewalks LA program at locations where the Americans With Disabilities Act must be addressed. The concrete sidewalk is protruding and buckled along the stretch of Eighth Street.

Jim O’Sullivan, president of the Miracle Mile Residential Association, said the tree removal has been a long time coming.

“We supported that,” O’Sullivan said. “You can’t even walk on that stretch, and there is no way you are going have someone with a disability go by there. There was no other option.”

Stromberg said as the city moves forward with the sidewalk repair program, it will be necessary to remove trees, but the hope is that it can be minimized. Stromberg pointed to a repair project in the 700 and 800 blocks of Lucerne Boulevard in which 14 trees were initially scheduled to be cut down, but only two were eventually removed. She said larger tree wells enabled crews to build new sidewalks while keeping most of the trees. Two that were removed showed signs of dying or disease.

Safe Sidewalks LA is part of the city’s $1.4 billion plan to repair broken sidewalks citywide over the next three decades. Stromberg said once locations with issues involving Americans With Disabilities Act compliance are repaired, the city will turn to repairing sidewalks in other locations. Timelines are still being determined.

Officials hope residents will partner with the city on the sidewalk repair program. The city will provide rebates of up to $10,000 to property owners who pay to have sidewalks fixed. The city’s Bureau of Street Services, Urban Forestry Division will determine if trees need to be removed as part of sidewalk repairs on a case by case basis.

“Another issue that is important to highlight with the sidewalk repair program is the city will replace the trees two-to-one, where they can put them in,” Stromberg said.

The types of trees to replace the ficus trees being removed have not been announced.

“The sidewalk repair program is an important and helpful solution to repairing and rebuilding our city sidewalks, many of which are in dire need of fixing,” Ryu said. “My office has worked with many communities and neighbors to get sidewalks fixed, and encourage others to participate.”

They pulled out hundreds of ficus from several blocks in Gardena last year for this same issue. I do really miss the cover and shade they provided, but they were causing immense damage to water and sewer lines (which we were on the hook for, even though they were cause by the city tree), not to mention the sidewalks and gutters. They replaced them with the slower growing and more water friendly crepe myrtles. Lessons learned for the city!