The Eli and Edythe Broad Stage in Santa Monica and Eva Price present “Small Mouth Sounds” by Drama Desk Award-winner Bess Wohl, and directed by Tony Award-nominee Rachel Chavkin for three weeks only, from Jan. 11 through 28. 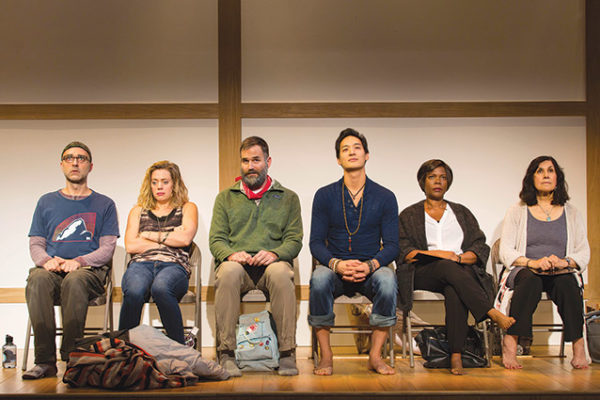 In the quiet of the woods, six runaways from city life embark on a silent retreat. As these strangers confront internal demons both profound and absurd, their vows of silence collide with the achingly human need to connect. Filled with awkward and insightful humor, “Small Mouth Sounds” is a play that asks how we address life’s biggest questions when words fail us.

The play is unique in that most of the action happens in silence. The audience learns almost everything through nonverbal communications from the actors. The inspiration for the play came from Wohl’s own personal experience at a silent meditation retreat.

“Small Mouth Sounds” played a record-breaking run at Ars Nova in 2015, and an acclaimed and extended commercial production at the Pershing Square Signature Center’s Romulus Linney Theater in 2016.

The play was chosen as a “Best Of” theater pick in The New York Times, New York Magazine, The Hollywood Reporter, New York Post and more.

The Broad Stage will also host the Celebrity Opera Series, opening on Jan. 15 with tenor Jonas Kaufmann. From Jan. 18 to 28, the play “Shakespeare his wife and the dog” will come to the stage as well.

‘Alice and Me’ outlines history of women’s equality movement