Preparations on Sixth Street to implement safety improvements championed by Councilman David Ryu, 4th District, and approved by a majority of survey respondents in his district, are underway. 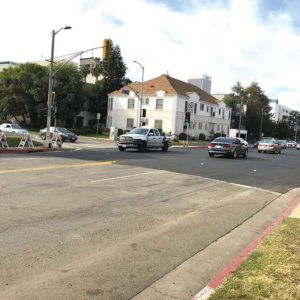 Paving will continue this weekend in preparation for safety improvements along Sixth Street. (photo by Luke Harold)

The Los Angeles City Bureau of Street Services began repaving portions of Sixth Street, between La Brea and Fairfax avenues, on Jan. 13 in advance of the improvements, according to a news release by Ryu’s office.

During a survey period last fall, approximately 60 percent of respondents in CD4 said they supported the improvements.

“After much discussion with the community and receiving over 700 responses to our Sixth Street survey, I’m glad to see this work to improve traffic safety on Sixth Street begin,” Ryu said. “These sensible improvements will save lives, and are a direct response to the kinds of accidents we have been seeing on Sixth Street.”

Another option, proposed by the Mid City West Community Council, would have created a road diet, reducing the number of traffic lanes to one eastbound, one westbound and one center median, with bicycle lanes on both sides.

“Data show that serious collisions have been common at many intersections along Sixth Street,” Scott Epstein, chair of Mid City West, said in an email. “That’s why the Mid City West board unanimously endorsed a redesign that would allow for safe left turns at all intersections from Fairfax to La Brea. Councilmember Ryu’s plan in contrast is limited to adding a left turn pocket at one intersection: Hauser. Councilmember Ryu has stated that the changes he will be making on Sixth Street are the best plan based on existing data. Moving forward, it will be essential to evaluate how the changes impact safety along Sixth Street. If the changes put in place do not reduce collisions across the corridor, I hope Councilmember Ryu will reconsider a comprehensive redesign to add a continuous dedicated left turn lane.”

Estevan Montemayor, Ryu’s communications director, said the councilman’s office will be evaluating the effects that the new street layout will have on motorist and pedestrian safety.

A road diet similar to Mid City West’s proposal went into effect on Venice Boulevard in Mar Vista, in Councilman Mike Bonin’s 11th District, for the area’s Great Streets project. According to data shared by Bonin late last year, collisions were down 22 percent, injuries were down 10 percent and speeding was down 15 percent. Data by the analytics company Inrix also claimed that the impact on commuters is less than one minute.

But the road diets in CD11 were unpopular among many residents complaining of added congestion, and some lanes were restored.

Repaving work will continue from Jan. 20-21, when both sides of Sixth Street between Hauser Boulevard and La Brea Avenue will be closed between 6:30 a.m. and 4 p.m.

The current layout of Sixth Street has led to several incidents involving drivers, bicyclists and pedestrians. In 2012, for example, a 74-year-old woman was killed after a car struck her near the intersection of Sixth Street and Hauser Boulevard. And with construction along Wilshire Boulevard for the Los Angeles County Metropolitan Transportation Authority’s Purple Line Extension project, drivers have been taking alternative routes, including Sixth Street, leading to added traffic and safety hazards.

“Public safety concerns on Sixth Street must be addressed,” Ryu said in a letter to constituents last year, when he hosted a community meeting at Pan Pacific Park to display both plans. “As part of reviewing the best and most effective improvements, we want to take all community input into consideration and get the fix right. Our office has been working with the LADOT to develop a plan of action, but community input throughout this process will be of the utmost importance.”

Additional improvements will be added this year, but have not yet been scheduled, according to Ryu’s office.

Trees on Eighth Street getting the ax

West Hollywood’s dogs had their day

As a resident of Beverly Grove, I am particularly interested in the reconfiguration of Sixth Street between Fairfax and La Brea and the safety improvements that are currently being implemented. Councilman David Ryu (4th District) should be commended for surveying hundreds of residents and spearheading improvements that met with the approval of the majority of respondents. What is a mystery to me is why your article in the January 18th edition of the Beverly Press devoted so much space to the Mid City West Community Council’s road diet option that was not adopted. Beyond that, you quoted statistics from 11th District Councilman Mike Bonin that painted the road diet in Mar Vista as a resounding success, without mentioning that residents and business owners in the area were so outraged over the traffic nightmare that ensued that a recall effort against Bonin was launched and nearly all roads in the area have since been re-striped (at taxpayer expense) to their original configuration! Not to mention that the Inrix statistic you quoted that claims the impact on commuters was less than one minute was an abject lie, as parents suddenly found that dropping their kids off at school went from being a five-minute trip to a half-hour ordeal, and businesses found that their customer base had dropped off precipitously. In the future, do your readers a service and investigate the statistics you are being spoon-fed by elected officials—and print something that more closely resembles the truth.