Sea snakes to be displayed at Natural History Museum

A yellow-bellied sea snake that unexpectedly washed up on Newport Beach will join the Natural History Museum of Los Angeles County’s permanent collection, which is currently displaying other yellow-bellied snakes. 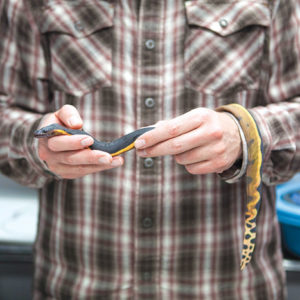 Yellow sea snakes have been washing up on local beaches making for a colorful new exhibit. (photo courtesy of Natural History Museum)

The recent specimen, which was found Jan.8, is the first to be documented in California in a non-El Niño year. It will be on display with its counterparts in the museum’s Nature Lab, an exhibit on California urban biodiversity starting Jan. 20.

“For the fourth time in just over two years, we have discovered this beautiful sea snake in Southern California,” said Greg Pauly, an associate curator at NHMLA. “It’s uncommon for these snakes to be seen this far north, as they favor warmer waters off the coast of Baja California, and, until now, unprecedented for us to see one in a non-El Niño year, when offshore temperatures are cool. We are thrilled to add it to our permanent collections and to have the opportunity to understand what brought it here, and what its presence might mean for the ecology of Southern California’s ocean.”

The snake was originally reported to the Pacific Marine Mammal Center, a Laguna Beach marine mammal response team, who collected it and contacted Pauly for identification.

Past documentation of the yellow-bellied sea snake appearing in California includes one example in 1972 on San Clemente State Beach, and three in the winter of 2015 and 2016, where they were spotted in Oxnard, San Diego and Orange counties, likely tied to warmer ocean temperatures resulting from an El Niño weather system. Yellow-bellied sea snakes are the most wide-ranging snake species in the world, occurring in the warmer waters of the Pacific and Indian oceans.

Although the snakes are venomous, Pauly stresses that Southern California beachgoers need not worry. “No one has ever died from the bite of this animal,” he said. “Their fangs are tiny and they can barely open their mouths wide enough to bite a person.” He advises anyone who comes across one of these rare snakes to keep a safe distance, and to send any photos to the NHMLA Community Science team by emailing nature@nhm.org or tagging photos on social media using #natureinla.

The Natural History Museum is located at 900 W Exposition Blvd. More information can be found at nhm.org/site/research-collections/news/ever-seen-sea-snake.