‘Pirates of Penzance’ swashbuckles its way to Pasadena

Pasadena Playhouse, the state theater of California, has reinvented its stage to present Gilbert and Sullivan’s “Pirates of Penzance,” as reimagined by the Chicago theater company The Hypocrites. From Jan. 23 to Feb. 18, this wacky beach party brings the audience on stage with flying beach balls, rubber duckies, ukuleles, banjos, plastic swimming pools and a tiki bar. 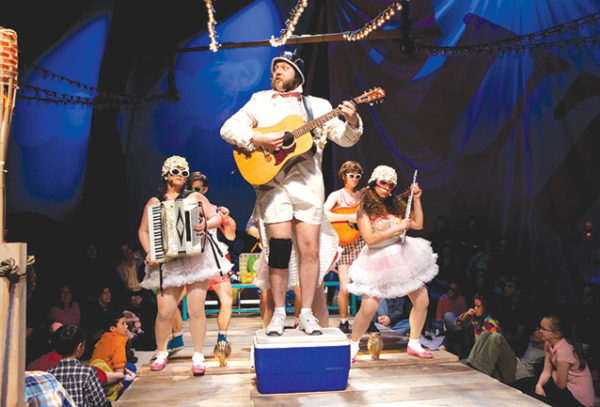 “Pirates of Penzance” is adapted and directed by Sean Graney; co-adapted by Kevin O’Donnell and with music direction by Andra Velis Simon. With its sappy pirates, dewy-eyed damsels, bumbling bobbies and a stuffy Major General, Gilbert and Sullivan’s farce follows the story of young Frederic, an orphan who has mistakenly been apprenticed to an ineffectual but raucous band of pirates, as he disavows the pirates’ way of life and falls for the beautiful Mabel.

The theater will remove the orchestra seats making way for a deck that will be a shared playing area for actors and the audience.

“I remember listening to ‘Pirates of Penzance’ the first time and thinking how brilliant it was,” Graney said. “It is joyful, playful and welcoming, which was a perfect place to start to remove the walls between actors and audience and get rid of the pretense of theatre.”

The Pasadena Playhouse is located at 39 S. El Molino Ave. For information and tickets, visit pasadenaplayhouse.org, or call (626)356-7529.

Curtain scheduled to rise on ‘The Last Wife’ at Theatre 40