A homeless man who lived in West Hollywood was sentenced on Jan. 22 to 15 years to life in state prison for the murder of a 28-year-old woman whose body was found in 2016 in a trash dumpster near San Vicente and Beverly boulevards. 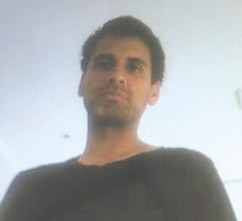 Authorities released a photograph of Camran shortly after he was named as a suspect in the murder. (photo courtesy of the LASD)

The murder prompted a manhunt in and around West Hollywood after the body was found on July 6, 2016 in a dumpster in an alley behind businesses in the 8700 block of Beverly Boulevard. Police quickly identified Camran as a suspect because the couple was known to frequent the neighborhood where the body was found. Authorities distributed photographs of the suspect to the media, which resulted in a tip.

Six days after the homicide, a caller told police Camran fled to Pomona. Officers found him on July 12 in that city near Towne Avenue and Arrow Highway.

Berger said Camran killed Kinney during a drunken argument. He was initially charged with first-degree murder and faced up to 25 years in prison.