A new Metro bike hub at Hollywood Boulevard and Vine Street, a beautification project near Grant Elementary School, and leading the process of designating the former Hollywood Reporter building as a Historic Cultural Monument were a few of Hollywood’s 2017 highlights. 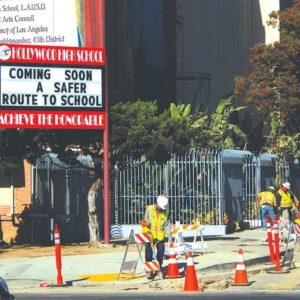 Pedestrian safety projects, including one outside of Hollywood High School, were among the safety improvements added in Hollywood. (photo by Edwin Folven)

“During the past year alone, we dedicated dozens of newly-built affordable housing units, improved walkability in our communities by enhancing pedestrian safety, and planted more than 1,000 trees across the district,” Councilman Mitch O’Farrell, 13th District, said in an email to constituents. “This is in addition to some of my citywide policy initiatives, such as replacing Columbus Day with Indigenous Peoples Day, strengthening our local economy through my ‘Open for Business’ reform, and developing measures to protect the character of our residential neighborhoods.”

There are other issues left to address in 2018, most notably homelessness, lack of affordable housing and rent-burdened residents, all of which have worsened in L.A. County over the last four years. Results from the 2017 homeless count showed CD13 third among the city of Los Angeles’ 15 council districts in the number of homeless – 3,282, representing an 8 percent increase from 2016, according to Los Angeles Homeless Services Authority. Countywide, homelessness increased by 23 percent. Volunteers participating in the 2018 homeless count will take to the streets later this month.

Council members have mentioned the Ellis Act, a state law that gives landlords a vehicle to vacate their rental units, as one of the obstacles they face. The act was passed in the 1980s to allow “mom and pop” landlords a way to exit the rental business if they were losing money, but city officials and residents have accused larger corporations of exploiting the act to replace affordable housing with luxury units.

Council will have funds from Measure HHH, a November ballot initiative approved by 77 percent of L.A. County voters to issue $1.2 billion in bonds to house the homeless, in its arsenal to attempt a reversal of the homelessness trend. Phase 2 of the PATH Metro Villas, located in the 300 block of North Madison Avenue, became the first project funded with Measure HHH. It includes 122 affordable apartments along with health and mental clinics.

O’Farrell said last month he was “thrilled that the first HHH-funded project in the city of Los Angeles will provide the permanently supportive housing that homeless individuals in the 13th District so desperately need.”

The councilman has also mentioned reforms to the California Environmental Quality Act would also help efforts for new development.

CEQA reform has eluded members of the state Legislature for years. Some of the projects prevented under CEQA-related lawsuits would provide infill development that, O’Farrell has said, might prevent an environmentally destructive urban sprawl.

Other highlights from O’Farrell’s work in Hollywood during 2017 include funding a pilot program called the Midnight Stroll to provide outreach, housing and other services to transgender sex workers on Santa Monica Boulevard; pedestrian safety projects near Hollywood High School and Hollywood Boulevard, between Gower Street and Western Avenue; and presenting the Made in Hollywood Honors, recognizing locally produced films and television shows nominated for Oscars and Emmys.

“Of course, we can always do more to promote the health and well-being of our families, create new (and preserve existing) affordable housing to allow more options for all Angelenos, and improve the look and feel of every street in the 13th District,” O’Farrell said. “I will always lead the way to improve your quality of life.”