On the heels of a series of destructive climate-exacerbated wildfire-related tragedies throughout the state, Los Angeles Council members Paul Koretz, 5th District, and Bob Blumenfield, 3rd District, held a press conference on Wednesday to announce two motions they introduced to the City Council. 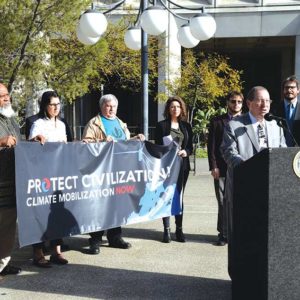 One of the motions is to establish a city of Los Angeles Climate Emergency Mobilization Department, the first of its kind in the nation, to oversee an emergency effort to radically reduce and remove greenhouse gas emissions citywide.

The second is a request for the use of California State of Emergency funds to establish the new department.

The motions, which stress what Dr. Martin Luther King Jr. called “the fierce urgency of now,” are grounded in a need to respond quickly to the causes, and not just the symptoms, of climate change.

The motions were developed in collaboration with the non-profit organization The Climate Mobilization and a coalition of Los Angeles social and environmental justice leaders that advocate for an emergency response to climate change rooted in the struggles of communities on the frontlines of the ecological crisis. This effort builds on the Mobilize L.A. campaign that the coalition, with Koretz, The Climate Mobilization, The Leap and renowned author Naomi Klein launched in June to transform the city to carbon-neutrality by 2025 through a mobilization on the scale of World War II, rooted in principles of environmental justice.