A 74-year-old man died in a fire on Jan. 1 in an apartment building in Koreatown. 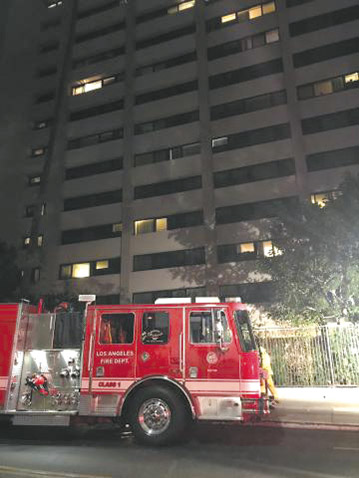 The Los Angeles Fire Department received a 911 call at 10:48 p.m. and arrived at 616 S. Normandie Ave. minutes later. No fire was visible outside the 16-story building, which houses a senior living facility, primarily for members of the Korean-American community, said LAFD spokesman Brian Humphrey. Firefighters entered and located smoke coming from a third-floor apartment. The male victim was found unresponsive in the apartment’s kitchen. Paramedics attempted to revive the victim, who was later pronounced dead at the scene.

The cause remains under investigation. The building was constructed in 1969 and was undergoing a retrofit that includes the installation of fire sprinklers. Humphrey said a smoke detector was functioning in the victim’s apartment. He said it alerted other residents who notified the fire department.