‘Jumanji: Welcome to the Jungle’ will surprise moviegoers, ‘Bright’ is a soppy buddy cop actioner

‘Jumanji: Welcome to the Jungle’

No film with the terrible name “Jumanji: Welcome to the Jungle” should be anything more than a bust. An easy cash grab for stars Dwayne Johnson, Karen Gillan, Kevin Hart and Jack Black. But here we are, and the sequel to the 1995 Robin Williams film isn’t the worst way to spend an evening with the family. 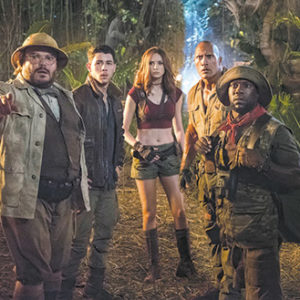 This isn’t the “Jumanji” of our predecessors, nor that of Chris Van Allsburg’s children’s book. Who plays board games anymore? The supernatural board game we once experienced in analog has gone digital, when four high schoolers happen upon a classic video game console during detention. But resident nerd Spencer (Alex Wolff) doesn’t recognize the brand. Oh well, that doesn’t stop him, jock Fridge (Ser’Darius Blain), Instagram celeb wannabe Bethany (Madison Iseman) or judgmental Martha (Morgan Turner) from trying it out.

Unlike “Jumanji,” however, the game doesn’t come to life. Rather, these teens are pulled into the jungle land of Jumanji. One catch: they take on the avatars they chose at the start of the game. Spencer (now Johnson) is no longer a skinny dude, but a beefed-up hero. Fridge becomes a loud-mouthed sidekick (Hart) who’s now two feet shorter.

Martha (Gillan) dons an uncomfortable, midriff-showing outfit, but she knows plenty of combat moves, including dance fighting (that might come up later). And Bethany (Black), who cares so much about her appearance, is now “an over-weight middle-aged man,” as she describes her new look.

The cast makes this experience worthwhile. Johnson doesn’t cover new ground, but making him an avatar for a high schooler – whom the two female students occasionally ogle over when he becomes dashing, through no intentional effort by young Spencer – makes for several good gags. Gillan (Nebula in “Guardians of the Galaxy”) is brilliant in this role, even if it’s beneath her. Meanwhile, Black and Hart are comically on point.

We might never get a good video game adaptation, but “Jumanji: Welcome to the Jungle” belongs to that unique class of films (“Wreck-It Ralph,” “Edge of Tomorrow”) that tap into what makes the medium fun. It’s a more family-friendly, Indiana Jones romp that goes down easy.

A buddy cop film set in an alternate present-day Los Angeles where elves, fairies, orcs and all color of fantasy creatures coexist, directed by David Ayers (“End of Watch,” “Suicide Squad”), written by Max Landis (“Chronicle”), and starring Will Smith – what could go wrong? So much. This just in: another clever premise murdered by clichés, all for the price of $90 million, how much Netflix dropped into this mess. 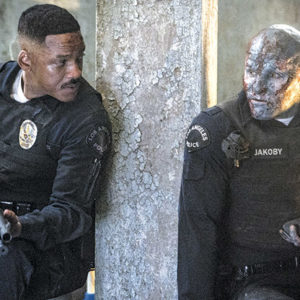 Human racism isn’t a problem anymore. The new cultural anxiety revolves around the Nine Races trying to live together, and of course that’s problematic in the City of Angels’ close quarters. Humans normally run the police force, but Nick Jakoby (Joel Edgerton) becomes the first orc on the force, and his assigned partner Daryl Ward (Smith) doesn’t feel safe, often making his prejudice against orcs, and frankly all fantasy creatures, well known in the most Will Smith of ways.

These two beat cops must traverse the cityscape to keep the peace of mundane disputes, until they meet an elf named Tikka (Lucy Fry), who has a wand. Magic is all but extinct, but that wand, legend says, can help bring back the Dark Lord (more on that in a sequel, I suppose). But a wand, in the hands of a Bright, folks with the ability to control magic, can make anything possible. So, our buddy cops must fight their way through gangs, orc and human alike, to keep that desirable away from its previous owner, Leilah (Noomi Rapace), who is all about that Dark Lord stuff.

To be fair, “Bright” isn’t a terrible film. It just could’ve been so much better. To start, Ayers is too involved in the buddy cop genre. Recycling plotlines from “End of Watch” and “Training Day” with a twist isn’t original. Max Landis’ screenplay spends far too much time dropping exposition into scenes, rather than letting the story and its rich world unfold as things become important.

To call it lazy writing isn’t accurate. Landis, son of John Landis, should know better. The story is drunk on its own concept, so focused on landscape it discards story structure and character chemistry. It wastes a good villain and ends predictably (painfully so). Too bad. Good fantasy is hard to come by.

12 culinary experiences worth revisiting in 2018