Jack Rutberg Fine Arts in Los Angeles, as a participating gallery in Pacific Standard Time: LA/LA, presents “Rico Lebrun in Mexico.” The exhibition will open on Jan. 20, with an opening reception from 6 to 9 p.m. at the Rutberg gallery located at 357 N. La Brea Ave. 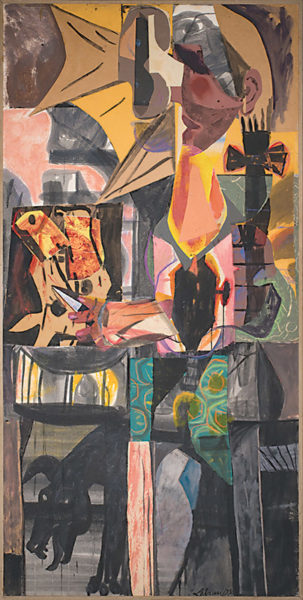 Rico Lebrun’s “Mexican Meat Stall” (1954) will be on display in the exhibit. (photo courtesy of Jack Rutberg Fine Arts)

Rico Lebrun, born in Italy in 1900, arrived in the U.S. in 1924. Settling in New York in his first years, Lebrun soon became a highly successful illustrator for such publications as Vanity Fair, Vogue, Harper’s Bazaar and The New Yorker. Having already worked on several murals, he taught life drawing and fresco painting at the Art Students League in New York, before moving to Southern California in 1938.

His impact in Los Angeles proved formidable as both an exhibiting artist and influential teacher at Chouinard Art Institute and the Jepson Art Institute where he ultimately became its director in 1951. In the 1940s, Lebrun was among the very few artists of Los Angeles to be included in major museums in New York.

This new exhibition, “Rico Lebrun in Mexico,” focuses on the period when Lebrun moved to San Miguel de Allende in 1952 to teach art at the Instituto Allende. Capturing everyday life and scenes in the town and marketplace, Lebrun painted vivid tableaus combining strong, dynamic lines, semi-abstract figuration and dense compositions, often incorporating collaged elements. Included in the exhibition are selected drawings which exemplify Lebrun’s expressive style and rarely seen paintings and collages, including “Mexican Street in the Rain.”

The exhibition opens in tandem with a separate exhibition, “Francisco Zuniga: Sculpture & Drawings,” and extends through March 17. Gallery hours are Tuesday through Friday, 10 a.m. to 6 p.m., and Saturday 10 a.m. to 5 p.m. For information, call (323)938-5222, or email jrutberg@jackrutbergfinearts.com.

Head to HD Buttercup for the latest in home furnishings