The Los Angeles Dodgers on Jan. 23 unveiled the team’s 60th anniversary logo, which will be worn as a uniform patch during the 2018 season. 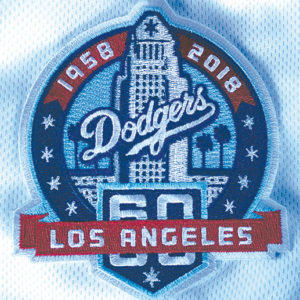 The focal point of the logo is Los Angeles’ iconic City Hall building, which was the tallest building in the city when the Dodgers moved to the city in 1958. The Dodgers celebrated the first opening day with a ceremony at City Hall and a parade through Los Angeles that ended at the Coliseum – the team’s temporary home from 1958 to 1961 before Dodger Stadium opened in 1962. The 10 stars around the logo’s border represent the Dodgers’ 10 National League pennants won in Los Angeles, and include five silver stars to denote the team’s World Series championships since 1958. The stars are six pointed, signifying the Dodgers’ six decades in Los Angeles.

The Dodgers’ anniversary is currently being commemorated at “60 Years in LA” – a pop-up museum on the Left Field Reserve level – and will continue to be celebrated throughout the 2018 season. For information, visit dodgers.com.

Rock a bye baby on a comfy new mat