A campaign to have a male Asian elephant named Billy moved from the Los Angeles Zoo to a sanctuary took another step forward on Jan. 24 when the Los Angeles City Council’s Arts, Entertainment, Parks and River Committee approved a plan to have the pachyderm’s health analyzed by a team of three independent experts. 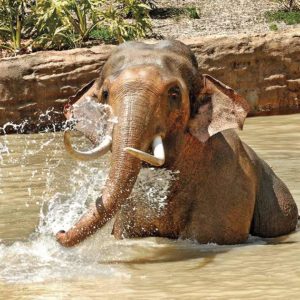 Billy the elephant resides in the L.A. Zoo. (photo courtesy of the Los Angeles Zoo)

Last April, Councilman Paul Koretz, 5th District, authored a motion calling for Billy to be moved from the zoo to a sanctuary. The committee meeting was the next step in considering Billy’s removal from the zoo.

The committee’s decision is also part of the process to determine if Billy is suffering health problems or may be better off living in a sanctuary, which theoretically would offer more space to roam. The city’s Office of the Chief Legislative Analyst was tasked with determining the experts who will evaluate Billy, said Tony Arranaga, communication director for Councilman Mitch O’Farrell, 13th District, who chairs the committee.

“They will be looking into the health and welfare of the elephant,” Arranaga said. “There is no timeline.”

Koretz said he agrees that Billy’s health should be analyzed, but he did not back away from having the elephant moved to a sanctuary. Billy, a 33-year-old elephant, is one of four pachyderms in the zoo’s 6.5-acre “Elephants of Asia” habitat, which opened in 2010 at a cost of $42 million. Because the other females are past reproductive age, and Billy is not and could present a danger to them, he is kept alone in his own area within the habitat.

Koretz said he initially wanted all the elephants moved out of the zoo, but now believes it is acceptable the females remain because it would give them more space.

“I am not a big fan of keeping elephants in a zoo,” Koretz said. “I propose we send Billy to a sanctuary, and in what many of us consider a significant compromise, we don’t shut down the elephant exhibit. We recognize we put a lot of money and a lot of effort into creating it, and we [should] make it a female-only exhibit. The main thing is dealing with Billy and his health.”

Zoo officials dispute that Billy is unhealthy or in distress. Some people who want the elephant removed have cited a head-bobbing motion Billy exhibits as evidence he is not well. Josh Sisk, the L.A. Zoo’s curator of mammals, said the head-bobbing is “stereotypical” behavior for elephants in captivity and does not mean he is in pain or discomfort. Sisk added that the “Elephants of Asia” exhibit is large enough for the pachyderms and reiterated that they are not mistreated. The zoo issued a statement after the committee’s decision to have the elephant analyzed by independent experts.

“We are disappointed the committee didn’t settle this issue in favor of the L.A. Zoo,” the statement read. “We’ve had this same debate nearly 10 years ago. But, we will respond to the committee’s requests. We will once again prove to them that we have an excellent elephant program, and all of the elephants, including Billy, receive exemplary care.”

Councilman David Ryu, whose 4th District includes the zoo, has not taken a position on whether Billy should be moved to a sanctuary. Ryu, who is a member of the Arts, Entertainment, Parks and River Committee along with O’Farrell and Councilman Curren Price, 9th District, said he wants the experts to evaluate Billy’s foot care and behavior. Ryu also submitted a letter asking for the council to analyze the “potential financial, logistical and accreditation impacts to the city and the zoo of moving Billy, the conservation efforts of the zoo and how those relate to Asian elephants, the benefits or detriments of life at a sanctuary versus the zoo, and the purpose and methods of the breeding program.”

Ryu added that he also supports the independent analysis of Billy’s health.

“Throughout my term in office, I’ve heard a number of concerns from our communities regarding Billy’s health, treatment and roaming capabilities inside the zoo,” said Ryu, who encouraged people to visit the zoo and view Billy to form their own opinions. “I personally visited Billy to review his care when I took office in 2015 and again this past month.”

Koretz was joined at the committee hearing by numerous animal rights activists calling for Billy to be moved to a sanctuary, including celebrities Cher and Lili Tomlin. The councilman also led a rally last Saturday in front of the zoo calling for Billy’s transfer.