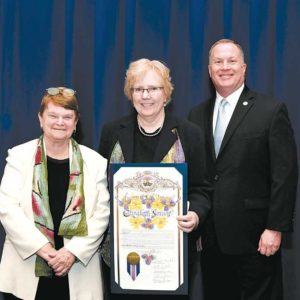 “Beloved. That’s a word Dr. King used to describe the human community he imagined and knew was possible. In Dr. King’s beloved community, poverty, hunger and homelessness could not exist because our standards of human decency would not allow it,” Kuehl said. “We honor someone who has done much to realize that beloved community in West Hollywood, and not surprisingly, she is much beloved for it.”

Savage served for 22 years as a civic leader in West Hollywood, and retired last fall. As director of the Department of Human Services and Rent Stabilization, she championed the city’s affordable housing and inclusionary housing programs to ensure that low-income residents could continue to live in the community. She also led the development of the city’s five-year strategic plan for aging in place and aging in community.

“I am very proud to be able to thank her for her enduring contribution to West Hollywood and its diverse communities,” Kuehl added.