“I can see clear public safety benefits to this,” Councilman Robert Wunderlich said during a Jan. 22 study session.

According to city staff, the program will be similar to those implemented in other cities, including several in Southern California. 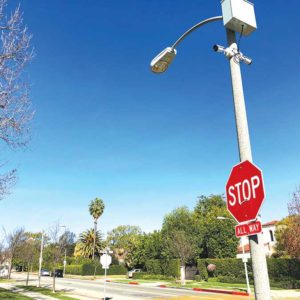 The intersection of Elverado Avenue and Rexford Drive is included in the pilot program. (photo by Luke Harold)

Additional residential areas that city staff said it wants to include in its camera coverage are certain intersections in the southwest and southeast portions of the city, and areas around Will Rogers Park.

Police wanted to expand CCTV coverage due to increases in property crimes in Beverly Hills’ residential areas, according to city staff.

“From a public safety perspective, the value of having a robust network of CCTV cameras in terms of crime prevention and crime investigation had long ago been demonstrated,” according to the report to council. “The forensic usefulness of the existing CCTV system is conclusive by way of the simple fact that numerous crimes that have occurred within range of the network have been solved utilizing evidence gleaned from the CCTV system. With these successes in mind, similar results can be expected from expanding the CCTV network into the residential areas of the city.”

Beverly Hills resident Mark Elliot said via email that his concerns about the program include how the data the city accumulates could potentially be shared with intelligence agencies beyond Beverly Hills, and whether police officers will come to rely on monitoring cameras instead of patrolling the streets themselves.

“I don’t trust Beverly Hills to get it right,” he said. “Were West Hollywood’s or Santa Monica’s City Council in control of this program, I might be able to put my concerns aside. But our historically conservative City Council, coupled with problematic policing and our generally inattentive citizenry, practically guarantees that this program will creep beyond the stated mission. And by then it is too late to put the genie back in the bottle.”

A few residents living near the intersection of Rexford Drive and Elverado Avenue said they supported the program for its potential to enhance law enforcement, and added that they don’t have privacy concerns. Marjorie Fasman said traffic issues in the area were also a concern.

“I think it will help with that too,” she said.

The city staff report to council underscored the support from residents.

“To date, only a handful of residents expressed concerns over the installations and these concerns centered on the potential of cameras being pointed at an individual residence,” according to the staff report. “This pilot and any future residential installations do not include pointing cameras at a residence; rather, activity in the-right-of-way (street and sidewalk) is what is being captured. Stressing this point in staff’s community outreach goes a long way to allay this concern. Overall, the public’s response has been overwhelmingly supporting of the program, and is in favor of expanding into new areas.”

City Council members said they support further expansion of the program in the future.

“I’d love to see the council’s goal of having this implemented throughout the entire city,” Councilman John Mirisch said.

Mirisch also said he supports planting signs near the cameras to communicate in a “friendly, clear, not big-brother-esque kind of way” that they’re rolling.

Beverly Hills Mayor Lili Bosse said she was “very frustrated” that the pilot program took this long to come to fruition. Last year during a January study session, the City Council directed staff to implement the program no later than April 2017. City staff acknowledged that “challenges arose” during the installation of the system, which included civil construction work such as trenching, boring and street furniture placement.