Beverly Hills’ Iranian community voiced its encouragement on Jan. 9 for the City Council formally declaring its support of protesters in Iran. 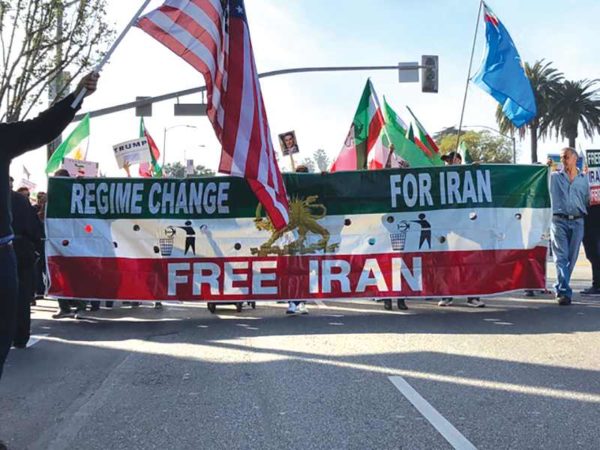 Iranian-Americans gathered in Westwood on Jan. 7 to show their support for protests against the government in Iran. (photo by Ari Bussel)

The protests began on Dec. 28 over Iran’s persisting high unemployment rates, growing inequality between the country’s rich and poor, and government corruption. Thousands of Iranians have fled the country over the past few decades to escape the oppressive conditions, many of them settling in Los Angeles and embracing their newly claimed freedoms in America.

“I am seeking the same type of freedom for my country,” Beverly Hills resident Mimi Ahdoot told the City Council.

The City Council resolution also cites “discrimination toward others based on religion, gender and sexual orientation; and restrictions on personal freedoms … [that] have created widespread frustration and anger with poor living conditions and the lack of opportunities in Iran” as reasons for supporting the protesters.

“Our city does have a special connection to the human rights of the people of Iran,” Councilman Robert Wunderlich said.

The city also received two letters in support of the council’s resolution.

Local Iranians took to the streets in front of the Federal Building in Westwood earlier this week to rally for the protests in their native country. Beverly Hills resident Ari Bussel said in an email that he arrived at 12:30 p.m., when there were a few hundred people hoisting flags and signs. At least 2,000 more people joined the proceeding over the course of the day.

“What was visible are the real Iranians; those who had to flee and can only dream of going back,” Bussel said. “They came dressed immaculately, some with walkers, others with canes, still others on wheelchairs or being supported by a spouse. They carried on with dignity and a sense of purpose. Their children, themselves parents now, came in droves. They remember Iran of the Shah, and they grew up on their parents’ upbringing, where Iran was the essence of life.”

The U.S. government has also declared its support for the protesters.

“It takes great bravery for the Iranian people to use the power of their voice against their government, especially when that government has a long history of murdering its own people who dare to speak the truth,” U.N. Ambassador Nikki Haley said in a statement. “All freedom-loving people must stand with their cause.”

In a Monday night Facebook post, Beverly Hills Mayor Lili Bosse encouraged the community to come to City Hall for the afternoon study session, when the council discussed the resolution to support the protests. She noted that the post accumulated more than 100 likes and all comments were supportive.

The mayor also mentioned the failure of many countries to oppose Nazi Germany before millions of lives were lost and World War II broke out.

“We are standing up,” Bosse said. “This is truly one of the proudest moments for us at City Hall.”