The United States Holocaust Memorial Museum will present the lecture, “Americans and the Nazi Threat: What did Southern Californians Know?” on Jan. 31 at American Jewish University at 7:30 p.m. 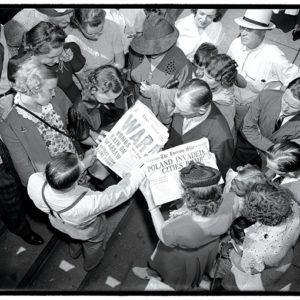 People looked at newspapers in Washington, D.C. on Sept. 1, 1939, the day the invasion of Poland began. (photo courtesy of American Cinematheque)

This ninth annual Linda and Tony Rubin Lecture series program is co-presented with University of Judaism, Sigi Ziering Institute and the Casden Institute at University of Southern California.

The panelists include Steven J. Ross, a history professor at the University of Southern California and author of “Hitler in Los Angeles: How Jews Foiled Nazi Plots Against Hollywood and America,” and JoAnna Wasserman, the museum’s education initiatives manager. Jon Healey of the Los Angeles Times will moderate.

Panelists will discuss actions taken by nearby communities in response to the growing Nazi threat in Europe and examine artifacts and headlines from that time period in southern California.

“Americans knew more about the rising Nazi threat in the 1930s and 40s than many people realize,” said Steven Klappholz, the museum’s western regional director. “In fact, part of our research for the forthcoming exhibition, Americans and the Holocaust, identified how Nazism was covered in local newspapers. Students and volunteer citizen historians from all over the country participated in our ‘History Unfolded’ crowdsourcing project, which is an extensive review of newspapers from this period.

“Already more than 75 articles from the Los Angeles Times and other local publications that talk about the rise of Nazism from that period have been identified.”

In the 25 years since it opened, the museum has educated and inspired more than 42 million visitors, including more than 10 million children and nearly 100 heads of state. Hundreds of area schoolteachers — and thousands more from all 50 states — are trained each year in how to make the Holocaust relevant and meaningful to young people.

The museum is marking its 25th anniversary by inspiring people to reflect on Holocaust history and “never stop asking why,” as museum Founding Chairman Elie Wiesel once said, “The Museum is not an answer. It is a question mark.”

The event is free and open to the public, but advance registration is required. The museum is located at 15600 Mulholland Drive. For information, contact the museum’s western regional office at (310)556-3222 or email at western@ushm.org.

Japan Foundation to give a free introduction to the “Noh” style