Customers flocked to Canter’s Deli on Tuesday to purchase 70-cent pastrami Reuben sandwiches in celebration of the deli’s 70th anniversary on Fairfax Avenue. Canter’s rolled back prices on the sandwiches from 4 p.m. to midnight to thank customers. 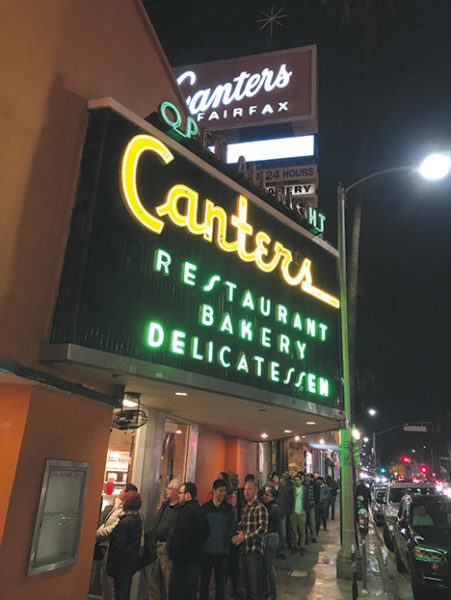 “Seventy years is a long time. We decided to do something special to mark this accomplishment and to show our appreciation,” said Jacqueline Canter, one of eight family members who operate the deli. “The family is incredibly proud of its heritage both on Fairfax Avenue and the city in general.”

The Canter family opened the restaurant in 1931, and in 1948 moved to 419 N. Fairfax Ave. The deli is known for pastrami, in-house bakery goods and a comfortable atmosphere.

Academy Award winner Nicholas Cage met his wife, Patricia Arquette, in the restaurant. The Wallflowers got their start in the deli’s Kibbitz Room bar, along with other famous musicians and groups including the Grammy-nominated band Haim. Canter said other celebrities and dignitaries who made the deli a “home away from home” include Marilyn Monroe, Arthur Miller, Cary Grant and John F. Kennedy. She thanked loyal patrons and invited everyone to visit the deli.