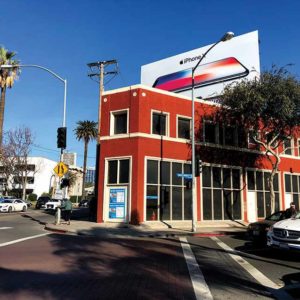 The building under consideration for historic and cultural status dates back to the early 1920s, but is currently vacant. (photo by Crystal Duan)

The property, a red brick building built in the early 1920s, is near the border of Beverly Hills and West Hollywood. It will soon be owned by Taylor Megdal, president of Megdal & Associates, a Los Angeles-based real estate development business.

Megdal’s plan is to redevelop the 5,250 square foot, two-story building into a six-room hotel over a restaurant with outdoor dining and a craft coffee shop.

The building is currently owned by billboard company OUTFRONT Media and is in escrow. OUTFRONT Media, which also owns a billboard on the roof, supported the designation as encouraged by Megdal, who used his role as future owner to propose the new business redevelopment of a building he called the “face of West Hollywood and Beverly Hills” because of its unique placement.

Megdal had a long-standing relationship with the billboard company before he began the process of buying the building.

“[OUTFRONT Media] had a passive approach to the asset, so over the course of lots of years of dreaming about [it] and convincing them, we were able to sell them on our vision of rejuvenating that corner and making that property the landmark it should be,” Megdal said. “More people engaging with it would also mean more eyes on their billboard.”

The building, one of the few in West Hollywood that is made of brick and not stucco, has four rooms of vacant apartments upstairs and is associated with the Pacific Electric Railway’s expansion in the 1920s, said West Hollywood Preservation Alliance board member Victor Omelczenko.

The building once housed a Maxfield clothing store and other businesses, serving as a gateway to the city.

Local business owner Jill Collins is skeptical of the building succeeding in its new capacity as a business. Collins, who owns the antiques store Waverly on Doheny, complained that a lack of parking space is the biggest concern for developing the property.

“I do approve of the designation,” Collins said. “But the project currently doesn’t account for parking and the only access is through an alley. I don’t see how that’s going to work.”

Other concerns West Hollywood residents brought up at the meeting involved how the outdoor dining aspect of the restaurant would function and if the rooftop would be open for only hotel visitors.

The building’s designation and usability will not be official until the City Council votes on the commission’s recommendation.