Hundreds of thousands of marchers took to the streets in cities nationwide for the second Women’s March on Jan. 20.

In Los Angeles, participants congregated in downtown, outside City Hall. 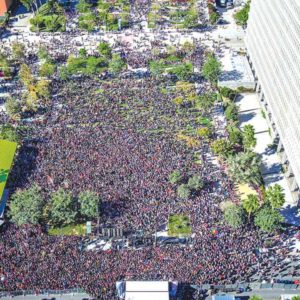 The view from atop City Hall on Jan. 20 showed the thousands of people who gathered in downtown. (photo courtesy of Mayor Eric Garcetti’s office)