The Los Angeles Police Department’s Wilshire Division is launching a new crime-fighting unit that will target areas with spikes in violent and property crime.

The new unit was made possible by a citywide LAPD initiative to reassign officers to field duties and bolster the number of officers on the streets. The command staff from the Wilshire Division expects to receive an additional 10 officers, with some being assigned to the special unit and others assigned to regular patrol duties. The deployment is expected to begin as early as next week. 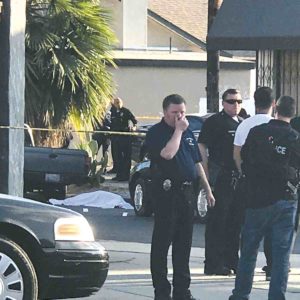 Police declined to divulge the logistics about when and where the unit will be deployed so they don’t tip off criminals, but the idea is to send officers into areas where they can have the greatest potential for reducing crime. That includes the Melrose Avenue shopping district, where auto burglaries and property crimes are a continual problem, said Lt. Kevin Brawner.

“It’s going to be four officers assigned to the unit, and one supervisor, and they will target the most problematic areas,” Brawner said. “We will evaluate strategies and look at patterns. If there has been an uptick in a certain area, then we will send them out to target that area. We are doing what we can to positively impact your lives out there.”

The Melrose Avenue shopping district is one of the division’s top areas for property crimes because of a large number of visitors. Thieves sometimes target cars parked on residential streets near Melrose Avenue. Motorists also attract thieves by leaving valuables visible inside vehicles. Those types of crimes also occur in the neighborhoods around Wilshire Boulevard and the Miracle Mile, because a large number of people come to the area for work, or to visit museums and other attractions.

The new unit will also be used to prevent and reduce violent crime, Brawner said. Last summer, two murders occurred in or near the Melrose Avenue shopping district, concerning residents. One of the homicides occurred on Fairfax Avenue, and involved a homeless man who stabbed another transient and was arrested soon after. The other allegedly involved one gang member who killed another after they crossed paths near Melrose and Sierra Bonita avenues. Additionally, a sexual assault occurred last July 3 in an apartment on Ogden Drive. That crime remains unsolved.

Police believe those murders were anomalies and do not reflect a growing crime trend. The total number of homicides in the Wilshire Division was not available. But having more officers on the streets should be preventative, and a greater police presence should help ease residents’ concerns, Brawner added.

“Melrose is one of the areas of our focus,” Brawner added. “But we will continue to identify problem areas and shift the unit to those regions.”

Peter Nichols, co-founder of the Melrose Action Neighborhood Watch, welcomed news about the new unit. He said other specialized units from the LAPD’s Metropolitan Division are sometimes deployed to the area and have a positive impact on crime reduction, but the deployment is sporadic. Having four additional officers assigned to the area should make a difference, he said.

“It’s sorely needed,” Nichols added. “They have been working diligently to attack these problems for a long time, and when they have been doing these operations, it has been effective. But they need to stay here. If this is something more on the permanent side, it’s good news. I am sure it will have an impact.”

Following the homicides last summer, Nichols announced that the neighborhood watch was looking into hiring a private security patrol for the area. That plan is still in the formative stages, but the idea is being considered in other communities, including the Miracle Mile. Jim O’Sullivan, president of the Miracle Mile Residential Association, said crime is a continual concern for residents in the neighborhood. He said the Wilshire Division getting more officers and the formation of the new unit is positive, and hopes it can also be used to make an impact in his community.

“It won’t hurt,” O’Sullivan said. “The heightened presence should mean that bad guys will go elsewhere. The more police we have here the better. I welcome it.”