West Hollywood’s dogs had their day

“We know there are a lot of happy dogs in West Hollywood today, and happy pet guardians,” the city’s mayor, John Heilman, said during a ribbon-cutting ceremony. 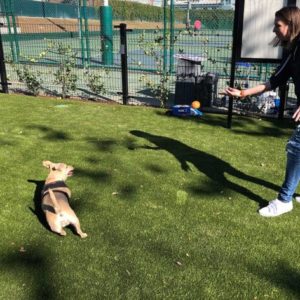 West Hollywood resident Tiffany Phelps and her chiweenie Piper played catch at one of the city’s new dog parks. (photo by Crystal Duan)

Among them were West Hollywood residents Megan Phelps and her wife Tiffany, who brought their chiweenie (chihuahua dachshund mix), Piper, to one of the two new parks, a 4,250 square-foot space for smaller dogs. Piper played catch with everyone in sight.

“She doesn’t like the other dog park,” said Megan Phelps, referring to the William S. Hart Park on De Longpre Avenue. “The ground there is chips, and she didn’t play or run. Now look at her go.”

The second new dog park, to the east side of the courts, is for larger dogs and measures 7,350 square feet. Both have a unique “K9 artificial” turf. This turf, Heilman said, is designed to be anti-microbial. It doesn’t burn the dogs’ paws and is a healthier alternative to AstroTurf or cement, he added.

Richard Settles, a 20-year West Hollywood resident, attended the ceremony with his chihuahua terrier, Bruiser. Bruiser played in both the large and small dog parks. Settles said he was happy that the new parks will allow him to let Bruiser off his leash without worrying about being fined.

Both dog parks are gated and fenced for dogs to run free. Greenery, mounds and terraces with additional benches, and dog water stations adorn the park. A mural called “Los Cuidadores” by artist and West Hollywood resident Ramiro Gomez is also on display in the small dog park.

West Hollywood Park, located at 647 N. San Vicente Blvd., is under construction as part of a city improvement plan. When construction began in January 2017, the city wanted to act on its residents’ desire for a more centralized dog park. The opening of the dog parks marked the beginning of phase two of the plan, said West Hollywood spokesman Joshua Schare. Heilman said the location is ideal for people from all over West Hollywood to gather.

Once the project is completed, West Hollywood Park will have an enhanced aquatic and recreation center, expanded green spaces with landscaping, picnic areas, public art, updated playgrounds and an AIDS monument.

Construction in West Hollywood Park will continue through the beginning of 2019, said Christina Sarkees, the city’s senior project management supervisor.

Where are the 2 dog parks? Both at West Hollywood Park???

Editor note: Yes, the dog parks are both located at the northern section of the park.