Road closures and other restrictions

The 75th annual Golden Globe Awards will take place at the Beverly Hilton on Jan. 7. The Beverly Hills Police Department will deploy additional staff and security measures to ensure a safe and secure site, using the latest technology and best practices for high profile events. 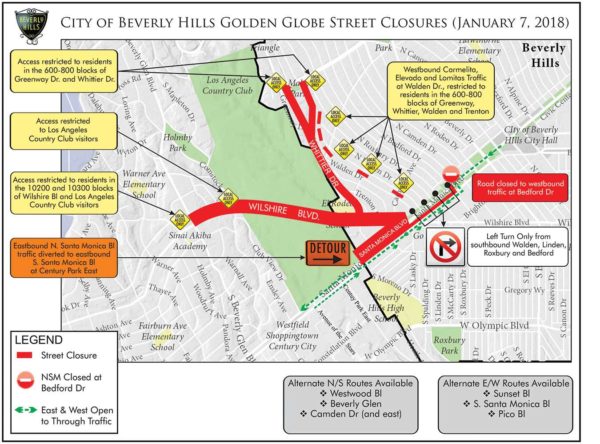 Road closures will be set up on Wilshire and Santa Monica boulevards with access provided only to local residents and to the Los Angeles Country Club members. Alternate east-west routes include South Santa Monica, Olympic, Pico and Sunset boulevards.

Partial closures will be established on Trenton and Whittier drives, and Carmelita, Elevado and Lomitas avenues, with access granted to residents only. All northbound and southbound streets east of Bedford Drive will remain open. Parking restrictions will be imposed on all affected streets.

The Hollywood Foreign Press Association and Dick Clark Productions has announced that they will partner with Facebook as the exclusive livestreaming platform for “The HFPA Presents: Globes Red Carpet Live,” the official red carpet pre-show for the “75th Annual Golden Globe Awards.”

The pre-show will feature numerous interviews with talent. In addition, the HFPA will share exclusive red carpet and backstage content to the Golden Globes Facebook page and @goldenglobes on Instagram giving fans a behind-the-scenes, real-time look at the awards show. Hosts for the pre-show include AJ Gibson, Jeannie Mai, Scott Mantz, Laura Marano and more.

The “75th Annual Golden Globe Awards” is set to air live coast-to-coast from the Beverly Hilton Hotel on Sunday, Jan. 7 from 5 to 8 p.m. on NBC.

“We’re thrilled to partner with Facebook and give viewers a front row seat to the red carpet that can’t be found anywhere else,” said HFPA President Meher Tatna. “We hope to enhance the overall viewing experience so fans at home can feel they’re enjoying the show alongside their favorite stars at Hollywood’s biggest party of the year.”

“Facebook has had a long collaborative relationship with the entertainment community, and we’re thrilled to be able to extend that through our work with the Golden Globes,” said Sibyl Goldman, head of entertainment partnerships for Facebook.  “We always aim to create unique experiences which bring communities together, and partaking in the kickoff of award season in conjunction with the Hollywood Foreign Press Association, is a demonstration of our commitment to bring fans together through entertainment they enjoy.”

The pre-show is set to stream on Jan. 7 from 3 to 5 p.m. and can be found exclusively at facebook.com/GoldenGlobes.