Conservationists are celebrating the purchase of 17 acres of land along a ridge west of Laurel Canyon made possible through the “Let’s Buy a Mountain” campaign, a grassroots effort to create more open space in the Hollywood Hills. 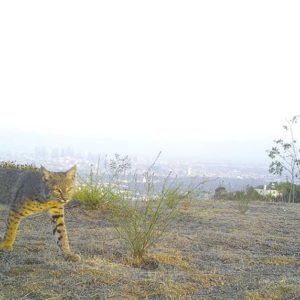 A camera installed on the land that will be preserved has captured images of numerous animal species roaming the area, including this bobcat. (photo courtesy of Citizens for Los Angeles Wildlife)

The land is located between Lookout Mountain Avenue and Stanley Hills Drive, in the mountain north of West Hollywood. It was purchased by a coalition including the Citizens for Los Angeles Wildlife, the Laurel Canyon Association, Citizens for Los Angeles Wildlife, and the Mountains Recreation and Conservation Authority. The groups raised $1.6 million for the purchase, and the sale was finalized near the end of 2017. The property was turned over to the Mountains Recreation and Conservation Authority last week, marking the end of a 26-month campaign.

“We were so excited,” said Jamie T. Hall, president of the Laurel Canyon Association. “It’s the largest single parcel in Laurel Canyon that remains undeveloped. It’s going to be completely preserved.”

The purchase was made possible through numerous donations, including a recent contribution of $100,000 from musician Don Henley, who made the donation in memory of his late Eagles bandmate, Glenn Frey. Henley, a former Laurel Canyon resident, wrote the song “Desperado” with Frey while staying in the canyon, Hall said.

“I greatly appreciate your efforts to preserve the rare undeveloped lands that remain in the Laurel Canyon area,” Henley said in a statement. “These resources are precious, both in terms of wildlife habitat and in terms of the human history that resides there.”

The campaign also received a $300,000 donation from the nonprofit David Schwartz Foundation, which helped organizers close the sale, Hall added.

“Our family foundation is very pleased to have been a part of this important effort to preserve the wild nature of this land for all time,” said John Schwartz, who previously lived near the area. “Protecting open space within thriving cities brings many unique attributes to our daily lives and informs in very important ways the character of a community.”

“I am very proud to see these 17 acres preserved for wildlife in Laurel Canyon. Supporting this purchase with $15,000 from my office was an easy choice – District 4 is not just home to people, but many coyotes, birds, mountain lions and more wildlife that make it such a dynamic and wonderful place to live,” Ryu said. “And now, Laurel Canyon wildlife have unencumbered access to their corridor for the new year thanks to [Citizens for Los Angeles Wildlife] and countless donors who believed in this acquisition.”

“I congratulate and applaud [Citizens for Los Angeles Wildlife], the Laurel Canyon Association, the Mountains Recreations & Conservation Authority and the Laurel Canyon Land Trust for this amazing effort,” Koretz added. “I am fully supportive and am happy to help out however I can.”

Hall said the space will be dedicated to wildlife preservation, as opposed to accommodating visitors. The coalition placed a wildlife camera at the site last year that captured photographs of deer, coyote, bobcats, raccoons and other animals traversing the parcel. In October, a photograph was taken of a newly discovered mountain lion.

“The long-term presence of larger mammal species in the mountain range between Laurel Canyon and Griffith Park depends on permanent protection of this 17-acre property,” said Paul Edelman, chief of natural resources and planning for the Santa Monica Mountains Conservancy. “The property’s standalone ecological resources are significant and equally important, it forms the core of a 55-acre habitat hub that provides for wildlife movement between over half a dozen surrounding habitat areas.”

The Mountains Recreation and Conservation Authority will oversee the property. A public dedication ceremony is being planned.

Retooling the schooling in Beverly Hills

‘Jumanji: Welcome to the Jungle' will surprise moviegoers, ‘Bright’ is a soppy buddy cop actioner