A strictly law-enforcement approach to addressing homelessness in Los Angeles County has yielded to a strategy heavy on outreach in recent years. 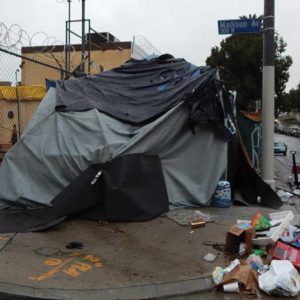 But residents throughout the county have been frustrated with crime allegedly committed by homeless individuals. Local and county officials met at West Hollywood’s Plummer Park for a community meeting to discuss ways they’ve been contending with these issues, and resources for residents experiencing issues with homeless people in their neighborhood.

One of the more alarming local crimes involving a homeless person occurred in West Hollywood in September, when a suspect struck a man multiple time with a double-edged hatchet. The suspect was Kisu Bradey Brown, 41, who West Hollywood Sheriff’s Station authorities described as “a transient … in the Hollywood and West Hollywood areas.”

But many more homeless individuals sleep on public sidewalks, benches and other areas without causing public safety issues.

“I don’t think simply taking people to jail is the answer,” Aloma said, adding that sheriff’s deputies now receive outreach training to deal with the homeless that wasn’t available early in his career.

There are nearly 58,000 homeless people in Los Angeles County on any given night, according to the 2017 Greater Los Angeles Homeless Count results. There were 105 in West Hollywood, including 92 living on the street.

According to a homeless needs assessment and demographic survey conducted by the city of West Hollywood, the city’s homeless population is an average age of 40.6 years old, younger than the average homeless person throughout most of the rest of the county. Approximately 47.7 percent the city’s homeless are white, and homeless people in West Hollywood were more likely to identify as transgender male to female. Approximately 31 percent identified as a member of the LGBT community, compared with 6.3 percent throughout the rest of the county.

“There’s that fine line, what constitutes crime? Our direction to anyone in our community is to call and let us come out and assess the situation.”

Voters throughout the county have overwhelmingly supported measures that allocate more funding to address homelessness. Measure HHH, passed countywide with 77 percent of the vote, and Measure H, passed by 69 percent of county voters, instituted a 25 percent sales tax for 10 years to bolster homeless services.

But Stephanie Cohen, a district director for L.A. County Supervisor Sheila Kuehl, 3rd District, said there are “a lot of things that need to happen before visible results will be seen.”

Some individuals require multiple visits from outreach workers before they’re convinced to accept services. Cohen mentioned a case study of a homeless person in the Palisades who had been living off Pacific Coast Highway for 15 years in a “sophisticated encampment” that included running water and a makeshift stove. It took 16 visits before he agreed to accept permanent housing.

“This is the first time that the county, the cities that we have around us, have dedicated so much time and so many resources to this issue, and we need to let it work,” she continued. “We need to build the foundation and the infrastructure that we’re set to build to address this issue.”

“It’s not so easy to say let’s just give them housing and get them off the streets,” she said. “Because that would be a big challenge for them to just go to standard housing. They need to be going to housing with services attached to it, because they need that supervision. And because that kind of supervision needs rules, it’s not so easy to convince a homeless person to accept housing with services.”

More soup please at The Tsujita