Twenty must-watch films, episodes and specials for the holidays 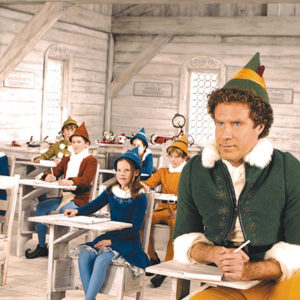 We all know the holiday classics, but what about those films, TV episodes, holiday specials and even sketches worth viewing every year? Sure, “It’s a Wonderful Life” is a memorable flick, but it’s a real downer. ‘Tis the season to keep it light, or merely enjoy those things that age gracefully and keep the spirits high.

Hardly amazing, but for an Adam Sandler flick, 2002’s “Eight Crazy Nights,” depicting a local degenerate who learns the importance of the season, is both crass and family oriented. Sandler draws upon his musical chops to basically create a film adaptation of “The Hanukkah Song.” The animation is terrible, but it’s a hoot best enjoyed with a kosher beverage.

I can’t praise this wacky holiday horror film enough. Amid violent shoppers and family drama, “Krampus” reminds us all to be thankful or else Santa’s evil doppelgänger will add terror to holiday anxiety. Also, murderous gingerbread men make for great celluloid entertainment.

Charles Dickens’ “A Christmas Carol” has been told countless times, but Scrooge McDuck is made for this role. This 1983 featurette includes all your favorite Disney characters: Mickey as Scrooge’s underpaid clerk Bob Cratchit and Goofy as the ghost of Jacob Marley.

“The Best Chrismukkah Ever”

As a whole, “The OC” hardly warrants much thought, but the first season relies on wit and nerdy references just as much as a high-stakes drama. From there, we learn about Seth’s (Adam Brody) seasonal tradition, Chrismukkah, a combined Jewish-Christian celebration. When all the show’s teen angst comes to a boiling point, Seth fears not. “I’ve got Jesus and Moses on my side,” he declares.

Horror films from the 1970s are much slower, but “Black Christmas,” one of the first slasher films that focuses on a crazed lunatic who terrorizes a women’s sorority during the holiday season, holds up. And let’s not forget about director Bob Clark, who would later helm “A Christmas Story.” For my money, “Black Christmas” is far better than his other far more obnoxious Christmas flick.

Long before Jim Carrey voiced Dr. Seuss’ iconic character, this 1966 TV special provided us with that Christmas classic, “You’re a Mean One, Mr. Grinch.” No amount of green fur or Anthony Hopkins narration can top this original.

Do not watch “Woodland Critter Christmas.” That statement remains true for most wholesome peoples. “South Park” champions inappropriate humor, but this 2003 episode is next level. Stan encounters some adorable forest creatures, but things go very, very, very wrong the more he learns about them.

Billy Murray’s Frank Cross is a modern-day Scrooge, firing someone during Christmas time and exploiting the season for a quick buck. Luckily, comedy masterminds like Carol Kane as the Ghost of Christmas Present are ready to set him straight in this memorable 1988 Christmas comedy.

In 1989, the National Lampoon’s folks sent the Griswold family on their third vacation: hosting Christmas for all the relatives. Prepare for one of the few watchable Randy Quaid performances, but beware: not all cats make it out alive.

What’s in the box? That question is in answered in this “SNL” music video starring Andy Samberg and Justin Timberlake as two mid-1990s R&B singers who don’t know what to get their girlfriends for Christmas. That is until they discover the perfect gift – it’s not family friendly: first, “cut a hole in a box” and then put something close to home in it for their special ladies.

Stop-motion animation is marvelous, and Rudolph’s red nose never shined brighter than the clay that molded it in this 1964 TV special that airs annually to this day.

“A Colbert Christmas: The Greatest Gift of All!”

I miss “The Colbert Report.” Stephen’s new gig just ain’t the same. When he worked for Comedy Central, his creative team gifted us remarkable things like this 60-minute holiday special in 2008. Colbert might be trapped in a cabin in bear country throughout the special, but many of his friends help commemorate the season with spirited songs: “Little Dealer Boy” by Colbert and Willie Nelson, “Can I Interest You in Hannukah?” with Jon Stewart, and “Nutmeg,” an innuendo delight performed with John Legend.

I once knew a guy who didn’t like this charming 1965 Christmas special. He’s not in my life anymore.

“The One with the Holiday Armadillo”

When Ross (David Schwimmer) on “Friends” fails to pique his son’s interest in the family’s Jewish heritage, he has no choice but to find a Santa suit to aid his story about the Maccabees and the meaning of Hanukkah. Too bad they’re all sold out, so he rents an armadillo costume instead, creating quite the comedic event in this episode from 2000.

Who hasn’t heard of the “Seinfeld” alternative to religious holidays? Created by Frank Costanza (Jerry Stiller), Festivus is the chosen holiday “for the rest of us” celebrated on Dec. 23. The traditional Festivus pole has even made appearances next to nativity scenes at some city halls around the country, prompting Fox News commentators to call foul. And anything that angers those tools is worth praising.

The 1988 actioner is a Christmas film from the office Christmas party at the start of the film to Carl Winslow (OK, it’s Reginald VelJohnson playing Sgt. Powell), the buddy cop on the other side of that radio, wishing John McClane (Bruce Willis) a merry Christmas at the film’s end.

“Because it’s Christmas” is the thesis of this 2003 film. That special time of year prompts people to act in ways they might usually not. Travel abroad in search of a hot American girlfriend, ask someone out, confess unrequited love, propose on a whim – “Love Actually” is a splendid rom-com and as a Christmas film, truly endearing and at times heart-wrenching too.

In Los Angeles, we all dream of a “white Christmas,” often the ones we’ve never known. That’s OK. At least Bing and Danny can remember that cascading white powder for us in 1954’s “White Christmas,” a film for all ages.

“The Nightmare Before Christmas”

Tim Burton’s 1993 production (Henry Selick actually directed) is the sing-along children’s film of the season. It’s a Halloween and Christmas story wrapped in a gothic package. If you’ve never tried to keep up with the lyrics to “What’s This,” then you’re probably a real Scrooge.

Christmas without “Elf” is useless. Will Ferrell’s 2003 comedy, depicting Buddy the elf trying to connect with his father in New York after life at the North Pole, survives the test of time. An epic snowball fight, the challenges of getting the star on top of the tree, maple syrup on spaghetti, countless one-liners – more than any other film, this one brings joy to the world.