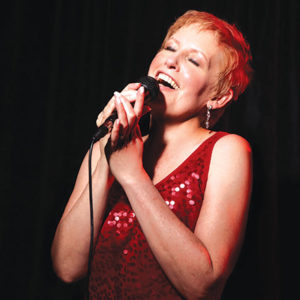 Liz Callaway will close The Sorting Room on Dec. 21. (photo courtesy of The Wallis Annenberg Center for the Performing Arts)

The Sorting Room will also introduce audiences to two new musical shows centered on beloved movies. In celebration of the 20th anniversary of the Academy Award-winning film “Titanic,” The Wallis will present “Titanique” in concert, a new retelling of the ill-fated ocean liner through the songs of Celine Dion on Dec. 14.

The For The Record family returns to The Wallis with a concert celebration of the soundtrack to “Love Actually” on Dec. 16-18.

“The Sorting Room is back, not once, but twice this season,” said Paul Crewes, The Wallis’ artistic director. “We didn’t know what to expect when we launched The Sorting Room last year. Everyone embraced our intimate nightclub experiment that we’re now presenting it twice during our season bringing more great artists from all genres including cabaret, spoken word, live music, and more.”

Drawing its name from its original function within the Beverly Hills Post Office, The Sorting Room gives emerging artists the opportunity to establish relationships with new audiences, while also giving established entertainers an intimate setting to perform, as well as develop new work.

The Wallis Annenberg Center for the Performing Arts is located at 9390 N. Santa Monica Blvd. For information, visit thewallis.org.