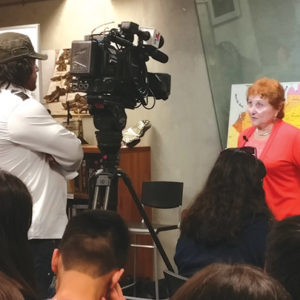 (photo courtesy of the Los Angeles Museum of the Holocaust)

Students from Universidad del Noroccidente de Latinoamerica in Ensenada recently toured Los Angeles Museum of the Holocaust and listened to Holocaust survivor Erika Fabian speak in Spanish about her wartime experiences. Erika was born in Budapest, Hungary, and was a young child when Hungary was invaded by Nazi Germany. She and her mother and sister spent much of World War II living under false identities, pretending to be Christian. Erika later had a long career as a writer and photographer, and lived for many years in Mexico City.