The event was founded by Saban Community Clinic board member Marcia Steere, who wanted to help at-risk children served by the clinic during the holidays. Steere gathered donations, and supplied clothing and other items to approximately 35 youth who gathered in 1989 in a parking lot outside the clinic’s facility on Hollywood Boulevard. The event grew over the years to include more donations, and now serves approximately 500-550 people. 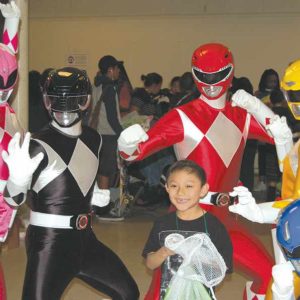 The Mighty Morphin Power Rangers made a surprise appearance at the Saban Community Clinic’s annual holiday party, much to the delight of children who attended the event. (photo by Edwin Folven)

“It just warms my heart when I see the smiles on their faces,” Steere said. “Some kids think Santa brought them presents and dropped them off here.”

The items distributed during the event are donated by companies and individuals. Steere uses monetary donations to purchase much of the clothing, including jackets, sweaters, sweatshirts, underwear, T-shirts and blankets. Toys, backpacks and books are provided to children, who also enjoyed a visit from Santa Claus and the Mighty Morphin Power Rangers. Hygiene items include toothbrushes and toothpaste, shampoo and personal health products. After filling bags with the free items, recipients enjoyed lunch.

Steere said the recipients are clients of the clinic’s three locations on Hollywood and Beverly boulevards, and Melrose Avenue. The Saban Community Clinic, which was formerly the Los Angeles Free Clinic, first opened in 1967 and serves approximately 100,000 people each year.

Steere said many families return annually, and the items make the difference in being able to provide Christmas gifts to their children. She recounted the story of a young girl suffering from cerebral palsy who was an infant when her single mother first brought her to the party. Now, the girl is a teenager.

“I’ve seen this little girl grow up,” Steere said. “I am so glad to see the daughter is doing well, knows where to get services and has a place to go.”

Loretta Jackson, a Los Angeles resident who receives services at the Saban Community Clinic’s Hollywood facility, said she looks forward to the event each year. Jackson, who brought her grandson Daryl, 11, and granddaughter NaeNae, 8, said she helps clean up after lunch to show her gratitude.

“We get clothing, books and toys, everything they need to be entertained,” Jackson said. “I am very grateful. It makes a big difference for me and a lot of other families who don’t have money to spend on Christmas. It’s a blessing.”

Gregory Jackson, who dressed as Santa Claus and visited with children at the party, was once homeless and often showered at the clinic in Hollywood. Volunteering to spread holiday cheer for the past two years is his way of saying thanks.