Pope Francis recently recognized the heroic virtues of Father Patrick Peyton, deeming him as venerable by the Roman Catholic Church. 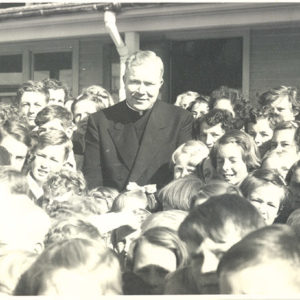 According to Holy Cross Family Ministries, hundreds of testimonies to Peyton’s virtue have been recorded. Some of these favors are remarkable healings for which there is no medical explanation. Should one of these healings be officially recognized as having no scientific explanation and approved by the Vatican as a miracle due to his intercession, it would lead to his beatification.

Peyton was born Jan. 9, 1909, in Ireland. The essence of Father Peyton’s ministry, which spanned half a century, began with his family’s daily rosary. After emigrating from Ireland to the United States, Peyton became gravely ill and the doctors had no hope of recovery.

“Father Peyton was a seminarian, studying for the priesthood, when he was stricken with tuberculosis,” said Father Wilfred Raymond, president of Holy Cross Family Ministries. “He prayed his rosary to the Blessed Mother and made a miraculous recovery. From that moment, he knew he was to be the one to carry out her apostolate, her ministry to bring families together for rosary prayer, just as his family had done.”

Over the years, Peyton advocated for families by preaching two powerful and memorable messages, “The Family That Prays Together Stays Together” and “A World at Prayer is a World at Peace.”

Known as “The Rosary Priest,” Peyton began Family Rosary, in Albany, New York, in 1942, with the goal of building family unity through the rosary. He went on to lead millions in prayer at 40 family rosary rallies that drew 28 million people, including 2 million each at events in Sao Paulo, Brazil and Manila, Philippines.

Peyton also spent the 51 years of his priesthood serving the spiritual needs of families through media. In 1947, he founded Family Theater Productions in Hollywood, which produced 900 radio and TV programs that featured hundreds of actors and celebrities, and had more than 10,000 broadcasts.

Peyton passed away in 1992. Holy Cross Family Ministries, which carries on the works of the priest, has headquarters in North Easton, Massachusetts, with its media production company, Family Theater Productions, in Hollywood at 7201 Sunset Blvd., and mission offices in 16 countries.

Lula Washington Dance at The Wallis