People and issues that defined 2017

The past year marked a period of tremendous change and growth in Los Angeles, West Hollywood and Beverly Hills, which are poised to continue that trend in 2018. Local government leaders and community members continue to fight for social justice and have kept the Los Angeles region one of the most dynamic and progressive areas in the country.

Each of the cities and neighborhoods covered by the Park Labrea News and Beverly Press excelled in many areas and faced challenges in others. Addressing homelessness continues to be a chief concern for leaders throughout the county. Development and the housing crisis remain at the forefront in local communities. Also in 2017, many cities and agencies grappled with ways to maintain health care coverage for low-income individuals and keep infrastructure in working order. The result was a sometimes tumultuous period marked by setbacks and victories.

While the city of Los Angeles is in the process of determining how to regulate the recreational cannabis industry, residents awoke to a prank one year ago on New Year’s Day when the Hollywood Sign was changed to read “Hollyweed.” The artist responsible was charged with misdemeanor trespassing and authorities enacted new security measures to prevent people from gaining access to the sign. The incident foreshadowed a changing climate in the county’s business community, however. West Hollywood has embraced recreational pot and will begin accepting applications from prospective cannabis businesses on Jan. 2, while Los Angeles will begin accepting applications from existing medical marijuana dispensaries on Jan. 3. In contrast, Beverly Hills has banned commercial cannabis businesses from opening in the city (medical marijuana delivery is still allowed). 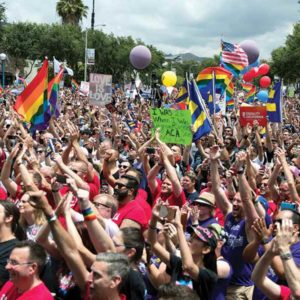 Tens of thousands of demonstrators came together in June during the #ResistMarch, which temporarily replaced the annual LA Pride Festival held in West Hollywood. (photo by Jon Viscott)

Infrastructure was also a hot topic as L.A. worked on new ways to repair roads and sidewalks, and the Purple Line Extension subway project chugged along Wilshire Boulevard. Work continues at multiple sites along the route between the Purple Line’s current terminus at Wilshire/Western and the end of Section 2 construction in Century City. Plans call for the Purple Line to eventually extend to Westwood by the middle of the next decade.

Excitement built to a feverish pace as Los Angeles was part of an unprecedented joint bid with Paris to host the Summer Olympics. Los Angeles Mayor Eric Garcetti pushed to bring the games back to the City of Angels for the third time. Last summer, leaders in Los Angeles and Paris pursued an agreement with the International Olympic Committee stipulating that whichever city did not receive the nod to host the games in 2024 would host four years later. In early September, negotiations resulted in an agreement for Paris to host first, followed by Los Angeles in 2028.

Homelessness continues to be a major issue, which was evident when the Los Angeles Homeless Services Authority conducted its annual homeless count shortly after the beginning of the year. Volunteers counted 57,794 individuals living on the streets countywide, with 34,189 tallied in the city of Los Angeles. In March, voters approved Measure H, which will provide $355 million annually in funding for 10 years to combat homelessness. With funds from Measure H, the Los Angeles County Board of Supervisors approved a plan in July that will provide more than $1 billion for homeless services over the next three years. The county and city of Los Angeles joined People Assisting the Homeless last week in breaking ground on the first homeless housing project to be funded through Measure H, and more plans will likely be unveiled soon.

In March, city of Los Angeles voters rejected Measure S, an initiative backed by the AIDS Healthcare Foundation that would have placed a two-year moratorium on new construction that added density in the city. Backers of the measure said after its defeat that the initiative forced a conversation about the future of development in Los Angeles and its impact on residents and infrastructure.

The Los Angeles City Council took a progressive step in August when it replaced Columbus Day – observed on the second Monday of each October – with Indigenous Peoples Day, which will honor native peoples in North America. The decision was based on a motion authored by O’Farrell, who is a member of Wyandotte Nation in Oklahoma. Indigenous Peoples Day will first be observed in Los Angeles on Oct. 8, 2018.

Councilman David Ryu, 4th District, focused on road and safety improvements on Sixth Street between Fairfax and La Brea avenues. Improvements to be implemented include continental crosswalks and left turn lanes at the intersections of Sixth Street and La Brea Avenue, and Sixth Street and Hauser Boulevard. Ryu also spearheaded a measure to address disturbances caused by party houses in the Hollywood Hills. Under the law, people who throw parties or allow others to host events that disturb neighbors could face steep fines for repeat offenses after warnings are issued.

Councilman Paul Koretz, 5th District, turned to issues involving animal welfare and the environment. Koretz called for a new law banning mill-bred pets and joined a campaign to have Billy the elephant moved from the Los Angeles Zoo to a sanctuary. The councilman was also at the forefront of tenant rights issues, authoring motions to protect residents from unlawful evictions.

The Academy Museum received a boost in September when Haim and Cheryl Saban donated $50 million to the Miracle Mile’s newest cultural institution, which is currently under construction. The Los Angeles County Museum of Art is also moving forward with its transformation, which includes a bridge over Wilshire Boulevard linking buildings on the northern and southern sides of the street. More information on those plans will follow in 2018.

The Beverly Hills City Council underwent changes in March when two new members were elected during a race for three of the council’s five seats. Incumbent Councilman John Mirisch received the most votes and was re-elected. Newcomers Lester Friedman and Robert Wunderlich won the second and third spots. Councilwoman Nancy Krasne lost her re-election bid by 18 votes. Kathy Reims, who was filling a vacancy left by the departure of former Councilman Willie Brien, pledged not to run for election. 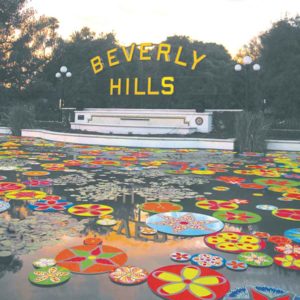 Beverly Hills BOLD events kicked off during the summer with a lily pond art installation. (photo courtesy of the city of Beverly Hills)

In May, the council adopted a no smoking ordinance for most public and private properties that will go into effect on Jan. 1. In July, the city banned commercial cannabis businesses in the city.

Marking a change in direction for the school district, the Board of Education appointed Michael Bregy to replace Steve Kessler, who retired after 40 years as an educator, as superintendent. Bregy, who resigned from a superintendent post in Illinois to accept the job, has launched an ambitious effort to solve the district’s history of deficit spending by considering reconfiguring its four K-8 schools. Two community forums on the issue will be held next month.

The BHUSD and the Beverly Hills City Council also grappled throughout most of the year over a joint powers agreement that regulates how much the city pays the district for city programming on its property. On Dec. 19, the City Council approved an agreement to pay the BHUSD $10.5 million in the 2017-18 fiscal year, $11 million in 2018-19 and $11.5 million in 2019-20. The approval marks an increase from the $9.7 million annually the city was previously paying the district for the use of property for Little League Baseball and other sports, afterschool enrichment classes, swimming lessons and additional programs.

The city of West Hollywood continued a transformation in 2017 that included a groundbreaking in January for Phase II of improvements at West Hollywood Park. The improvements include two new dog parks scheduled to open on Jan. 13, as well as a new aquatics center and recreation facility, AIDS monument, children’s playgrounds, sports courts, classrooms and meeting facilities. Other portions of the project are scheduled to open next year and in 2019, with all work completed by 2020.

West Hollywood embraced “the resistance” last June, when organizers of the annual LA Pride Festival held the #ResistMarch from Hollywood to the heart of Boystown, instead of the yearly parade. Tens of thousands of people marched in peaceful resistance to federal policies and in support of human rights. The LA Pride Festival is scheduled to resume on June 9-10, 2018.

While the past year was full of change, 2018 is already showing promise as a time of growth and prosperity, albeit a period of uncertainty based on changes in federal law. New developments can be seen going up on the local skylines, and officials are poised to more comprehensively address issues such as homelessness and affordable housing.

Besides the highly anticipated midterm elections, California voters in 2018 will be asked to elect a U.S. senator, multiple Congress members, a new governor, attorney general and many other state officer holders. In Los Angeles County, elections will be held for assessor, sheriff and supervisors in the 1st and 3rd districts. Voting for two of five BHUSD members will be included in the Nov. 6 General Election.

The Park Labrea News and Beverly Press will continue to cover the issues, people and places that make Los Angeles, West Hollywood and Beverly Hills dynamic places to live, work and visit. One thing readers can count on in a world of constant change is that those values and that approach will never wane.

Celebrate 2018 with the Postmodern Jukebox at Disney Concert Hall

Lay down the L.A. laws