The Colburn School announces the appointment of esteemed oboist Ramón Ortega Quero to its faculty. Quero, who is currently principal oboe of the Bavarian Radio Symphony Orchestra and the incoming principal oboe of the Los Angeles Philharmonic, will accept students to his oboe studio starting in fall 2018. 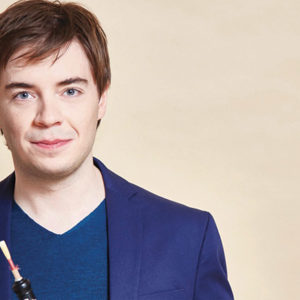 Ramón Ortega Quero will join the Colburn Conservatory of Music faculty, and is accepting students for the fall term. (photo courtesy of the Colburn School)

A native of Granada, Spain, Ramón Ortega Quero is recognized around the world as one of the most promising musicians of his generation. During the 2017-18 season, Quero performed in Spain with Orquestra de Extremadura and Orquestra de Castilla y León, with the Leipzig Gewandhaus Orchestra and toured throughout the Netherlands with Philharmony Zuidnederland. Quero is also a member of, and on tour with, the wind quartet variation5, whose self-titled album was released on Berlin Classics (Edel).

Quero received training from Miguel Quirós at the conservatory in Granada, and became a member of the Andalusian Youth Orchestra when he was 12 years old. In 2003, Quero reached an important milestone when conductor Daniel Barenboim accepted him as a member of the East-West Divan Orchestra. One of Ramón Ortega Quero’s most pivotal moments was winning first prize at the ARD Music Competition, the largest international classical music competition in Germany, in September 2007, paving the way for his career as a soloist.

Since spring 2008, Quero has been the principal oboe of the Bavarian Radio Symphony Orchestra under its Principal Conductor Mariss Jansons. In fall 2018, Quero will take over as the principal oboe at the Los Angeles Philharmonic. Quero has also worked with renowned conductors Riccardo Muti, Herbert Blomstedt, Sir Colin Davies, John Eliot Gardiner, Daniel Barenboim, Nikolaus Harnoncourt and Bernhard Haitink.

Auditions will be held in Los Angeles at the Colburn School in March and May 2018. For information, email admissions@colburnschool.edu.