The Petersen Automotive Museum recently opened a special exhibit dedicated to children and their longstanding fascination with fast cars. Showcased in the Charles Nearburg Family Gallery, “Sidewalk Speedsters: The Grown-Up World of Children’s Cars” will offer guests a look at children’s competition cars. 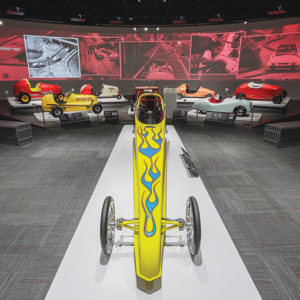 An exhibit geared toward children and their fascination with racing and fast cars has opened at the Petersen Automotive Museum. (photo courtesy of Nikki Riedmiller)

Presented by Lucas Oil, the display will feature a diverse range of child-sized race cars – from old to new, electric- to gas-powered, to sophisticated and affordable to luxurious vehicles. A $430 million per year industry as of 2015, children’s vehicles have become a phenomenon, populating the shelves, catalogs, and online inventories of toy and game retailers worldwide.

While many adults may wonder whether owner-driven automobiles will continue to be part of the everyday driving landscape, small, powered children’s cars are growing in popularity among youths.

“‘Sidewalk Speedsters’ will mark a playful change of pace for the museum,” said Leslie Kendall, Petersen chief historian. “I had so much fun choosing the vehicles on display, as I grew up racing similar cars. The whimsical selection will perfectly juxtapose the more serious presentations, adding an exciting element of surprise to the museum’s overall atmosphere.”

The Petersen Automotive Museum is  located at 6060 Wilshire Blvd. For information, visit petersen.org.

The Autry outlines history of toys